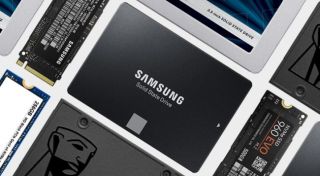 Bought a bunch of digital games this holiday? These cheap SSD deals should give you all the storage you need for all your recent purchases. As HDDs go the way of the Dodo, the speed and performance of SSDs are making them the new standard storage solution for PC gamers.

The best gaming PCs often use SSDs as their primary boot drives, thanks to their speed and reliability. One of the more apparent benefits of an SSD is that they bring down game load times, especially massive open-world games like Red Dead Redemption 2.

Here are the best cheap SSD deals of the week. There's a tasty variety of SATA SSDs with some awesome deals, along with our choices for best NVMe SSDs.

WD BLACK SN750 with Heatsink | M.2 NVMe | $100 (save $50)
This super-fast NVMe SSD has a pre-installed heatsink to help with maintaining performance over long periods of time. If you don't care about thermals as much, the heatsink-less version is $82. (Posted: 2/9)