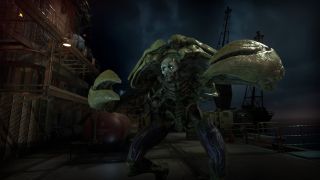 Snapshot Games' strategy 'em up is deep and difficult, so you may feel in need of some Phoenix Point guide. It's easily to feel thrown in at the deep end, even if you're a veteran XCOM player.

That's because Phoenix Point is subtly different in a lot of small ways. So in order to help out new players, here's a list of Phoenix Point tips I wish I had known when I first embarked on my fight for survival against the mutant invasion.

Factions are everything in Phoenix Point; you won't get far without making some friends with whom to recruit troops and trade resources. There should be at least one faction Haven near your base when you start, but the faster you make contact with all three factions, the faster you can start getting their approval.

At 25/50/75 approval you unlock special stuff relating to that faction, including specialist Phoenix Point classes. Similarly, watch out for Haven Defence missions. These are some of the most important objectives in the game, as they increase that crucial approval rating.

Your main source of new troops will be faction Havens, the last refuges of humanity still safe against the all-consuming Mist. This is why it’s important to find a faction right away, complete their introduction mission, and research Haven Recruitment Protocols. Then you can recruit a new member by flying to a haven while in the Geoscape—it'll have a little person symbol on it—hitting Haven Info and then Recruit. The new soldier will get in the plane if there's space, or magically teleport back to base if there isn't.

You can change your soldier’s armour

Each unit starts with a set of armour designed for its current job. In most cases this armour is fine, but there’s nothing to stop you mix and matching if you feel like it. This is particularly useful for the Heavy, whose armour lowers accuracy: replace their helmet with a Sniper's to make them far more likely to hit their target.

Remember, you can be ambushed

Early on you’ll be running around scanning every map marker you see—this is good practice, as it’ll let you make contact with factions and find vital resources—but be aware you can be ambushed while you’re scanning. Think carefully before initiating one last scan before returning a squad of injured soldiers to base.

Aircraft are some of the best upgrades you can get: they let you have more squads out in the world at the same time. You can build them for large amounts of resources or steal them from factions by raiding their Haven. Unsurprisingly they won't be fans of this, and the mission to take it can be quite difficult, so think carefully before you go through with it.

Like XCOM, certain pieces of equipment are locked behind autopsying an alien. The Arthron is especially good as it unlocks the grenade launcher, a useful bit of tech that will help ensure that your Heavies can actually hit things. The Triton autopsy is also useful as it unlocks shotguns, if you want to go down the close-quarters combat route.

Get the most from your action points

Combat is relatively simple in XCOM: you move a unit, then you can choose to shoot or move again. Phoenix Point's more granular action point system lets you shoot and move, move a little, shoot and move a little again, or even move one square at a time.

Take the opportunity to reassess your options with each step: your turn doesn’t end until you’ve used up all your actions. For instance, try popping from cover, shooting an enemy, and then scooting around a corner so they can’t shoot back.

A shot to the head in XCOM is a reliable way to end a threat, but the mutated invaders of Phoenix Point are far less predictable. Instead, prioritise disabling weapon arms to reduce the threat enemies pose. Equally, disabling a body part inflicts bleed damage; disable multiple body parts to stack bleed damage on tougher foes.

When you put a unit on overwatch you position a vision cone to establish the zone in which they shoot enemies. But did you know you can adjust the size of that cone? Hold down control and scroll the mousewheel to expand and contract the cone. It took me hours to realise this, now you get to know it right away, you lucky things.

You can lose bullets by reloading

In basically every videogame reloading is magic: it always refills your gun to full without losing any bullets, even if you’d only shot once. Phoenix Point takes a more realistic approach, as reloading will lose whatever bullets you had remaining in your current magazine. Only do it when you absolutely have to.

Cover isn't everything, either

If you’re an XCOM veteran, you’ll be used to hugging cover like your life depends on it. In Phoenix Point it’s much less important. This is because it offers less protection and there are plenty of melee enemies.

The main reason is the game's more granular movement, which lets you shoot at an enemy out of cover before hiding around a corner. Either way, learn to be a little more aggressive with your movement.

Return Fire is the Worst

You see that 'Return Fire' perk your Assaults can get? The one where soldiers can shoot back at enemies who shoot them? Sounds great, doesn't it? Yeah, enemies have that, too.

It can really whittle your squad down if you’re not careful, so don’t take optimistic potshots at an enemy with Return Fire. Go for hard-hitting weapons like a shotgun or heavy weapon to take them out before they can shoot back. Or alternatively, hit them with a Sniper from outside their range.