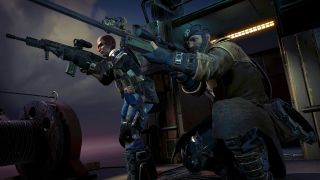 How do Phoenix Point classes work? If you’ve just started playing Phoenix Point you’re probably wondering how exactly your ragtag group of soldiers fit together. You'll probably be thinking "wait, the Heavy has a jetpack?" and "who is this weird Bane cosplayer with a giant hammer?". Well I have the answers for you: here’s my Phoenix Point builds guide to getting the best out of your soldiers.

First, though, a word on stats: every soldier has three stats (well, they actually have many more, but only three can be directly levelled up). They are:

The following includes a breakdown of the starting Phoenix Point classes. There are also specialist ones to be found if you reach a certain level of approval with some of the game's different factions, which allows you to recruit their special soldiers. I'll be updating this guide with information relating to them in due course.

These are the classes that are available from the very start of the game. You’ll start with Snipers, Assaults, and Heavies in your original squad, but you can recruit other types from factions. Each has their own spin on these classes: for example, the Disciples of Anu Assault carries a shotgun instead of an assault rifle, but they all function very similarly. The fourth starting class is the Berserker, who can be recruited as soon as you meet the Disciples faction, but they won't appear in your initial squad.

The Assault is the generic soldier class. Naturally they are proficient with assault rifles and can acquire lots of perks based around free actions and movement. You start the game with more Assaults than any other class, and that’ll likely be the case throughout. They’ll be the backbone of your squad, with other classes filling in specialist roles. They tend to be great medpack carriers: they can rapidly get to the side of an injured soldier before they bleed out.

A big soldier with a big gun. The biggest immediate contrast between Phoenix Point’s Heavy and their XCOM counterpart is that this one has a jetpack, making them surprisingly mobile in addition to being tough and hard hitting. The downside however is that heavies have poor accuracy if they're not at close range. I often found myself using mine like a jet-propelled Deliveroo driver, hopping from rooftop to rooftop gathering supplies while the rest of the team took out the main threats. They tend to go well with grenades—or even better, grenade launchers—due to their poor accuracy.

Perks: Heavy perks are a strange mix, with bonuses to shotguns, melee and grenades at different points in the tree. I tend to gravitate towards the grenade-enhancing Boom Blast.

Stats: Strength is your friend here, it will enable the Heavy to survive at close enough range to actually hit anything and carry more stuff.

Dual Class: Those who actually want to lands hits with their big gun probably want to grab Sniper and make liberal use of Quick Aim. Alternatively you could go Assault and use Dash to run up close to the enemy.

The Sniper is the class that will be the most familiar to XCOM players. Long range, accurate, and hard hitting, but fragile and not particularly fast. Sniper should perch atop the highest building they can find and use Overwatch to protect their more aggressive teammates.

Perks: The Sniper also has a lot of action economy perks, like Quick Aim, which reduces the action cost of the next shot and gives it an accuracy bonus. I particularly like Extreme Focus—which reduces the cost of Overwatch—which you'll probably be using a lot.

Stats: Sniper doesn’t really need to focus on any one stat. More Will and Health are always useful, but Speed isn’t necessary unless you consistently find your Sniper out of position.

Dual Class: Combine Sniper with an Assault to get access to Return Fire. But honestly, pure Snipers work just fine.

Recruited from the Disciples of Anu faction, Berserker is an aggressive melee class capable of dealing enormous damage, if they can actually survive getting to the front line. A true glass cannon, it's not unusual for your Berserker to get more kills than anyone else on a mission, but also die horribly. Use with care.

Perks: Close Quarters Evade reduces damage from nearby enemies, so is a must for staying alive, while Armour Break does exactly what you’d expect. It's invaluable against tougher enemies.

Dual Class: Dual classing with Assault will get your Berserker access to Dash, getting them into combat much faster. Be careful though, as they probably won’t have that much Will to spend.