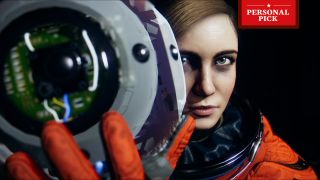 I like my science fiction slow, thoughtful, and creepy, which is why one of my highlights of 2019 was Observation. Riffing on stylish, muted '70s sci-fi flicks like Solaris, Alien, and Silent Running, No Code's game tells its strange, eerie story with real class and restraint. Set aboard a stricken space station, whose design is based on the real-world International Space Station, you play as an artificial intelligence named SAM that has, somehow, become self aware.

While this sounds a lot like 2001: A Space Odyssey: The Game—which the marketing leaned heavily into, including press being invited to a screening of Kubrick's movie—the comparison is ultimately quite superficial. SAM is not HAL. They're both advanced AI struggling with a newfound sentience, in charge of the fragile lives of vulnerable astronauts. But SAM is much more benevolent, with motives that are never really clear—at least until that mind-bending finale.

But even then, a lot is left unanswered—which is, again, another quality Observation shares with the classic sci-fi that influenced it. Dig into the crew's computers and you'll discover enough information to piece together a narrative—but a lot is also left to interpretation, to your own imagination. I really respect this approach and how developer No Code resisted the urge to hand players everything on a plate. Great sci-fi makes you do some of the mental legwork yourself.

The station itself is a brilliantly sinister, claustrophobic setting. I like how No Code set Observation in the near future, because that familiar technology helps ground the game. We've all seen astronauts smiling and floating around in the ISS, which gives exploring a dark, abandoned version of it extra resonance. I also appreciate the amount of research that went into realising the station, with hundreds of tiny details giving those head-spinning corridors a real richness. You could imagine people living and working here before things went bad.

Puzzles are at the heart of Observation, which are all presented in the form of arcane futuristic computer interfaces. No Code founder Jon McKellan was the lead UI designer on Alien: Isolation and brought some of that same utilitarian, retro-futuristic design sensibility to his own game. I found it interesting that he had to break his own rules of usability to create interfaces that were, in the game's universe, designed as readouts for SAM, not humans. This let the designers create puzzles that are as satisfying to figure out as they are to solve.

I'm just glad a game like Observation exists, and that its publisher, Devolver, was willing to take a risk on something so, well, weird. This is a smart, understated, slow-burning game; an anti-blockbuster that asks you to think about what's happening on the screen, not just sit there and passively absorb it. For all those reasons it was never going to sell five million copies. But if you want a game that gives you something a little more nutritious to chew on, it's worth investigating. No Code is already hard at work on its next thing and, after this and similarly unique Stories Untold, I can't wait to see what they dream up next.