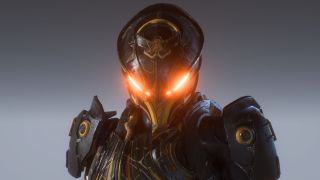 Welcome to our guide to Anthem's Interceptor Javelin, the fastest, sleekest, most agile mech of the four. The Interceptor is extremely mobile, and specialises in dealing close range damage with short-range gear abilities and dual-knife melee attacks.

The Interceptor's fragility can make it a tricky class to master, and it doesn't help that the gear descriptions in the Forge are often ambiguous about what the skills really do, and sometimes they are just plain wrong. Let us clear the fog with some combo tips and notes on how best to use your Interceptor, based on about 25 hours we've spent with the game.

Make the most of the Interceptor's mobility

Triple jump: Hold down the jump button on the first leap to get a bigger jump. The second and third jump will always be the same height.

Dash: A quick thrust that is great for dodging Titan attacks. Hold down the dash button to chain up to three dashes together. You can change direction between dashes to triple dash around a corner, or triple dash sideways to strafe out of the way of enemy fire. You can use your triple-dash even if your Javelin is overheated or your team is flight restricted. Use this speed advantage to grab orbs, fetch Shaper artifact pieces and revive allies while your friends are grounded.

Fly farther: The Interceptor has access to the same cooling techniques as other Javelins—sharp dives and waterfalls—but it has an advantage over distance because it doesn't have to start flying right away. Triple jump, triple dash, and then activate flight to save some booster energy. Like Storm, the Interceptor can dodge in midair using the dash command.

The Interceptor has no long range detonator abilities, which means you have to do most of your damage point-blank. As you will be fighting at close range a lot, prioritise Components that most boost your shield and armour capacity, ideally while lending boosts to your chosen elemental primer attacks. Melee damage bonuses are always useful for the Interceptor too.

When you land a combo the Interceptor gains an aura that inflicts the primer's status effect on nearby enemies. This can be used aggressively, or as a way to stay alive. Here are a couple of solid builds for different situations.

Venom Bomb is a reliable primer that affects a wide area of effect and inflicts acid status (Acid reduces enemy resistances by a third). You can throw it as you're flying and then use your very useful spinning air melee attack to land and detonate the combo. This clears weak mobs very effectively.

This is a great go-to combo for blasting through the story, or for solo sessions where individually slicing up lots of enemies can become tedious. Pair Venom Bomb with Tempest Strike to be more effective against epic enemies and bosses, or go all-acid with the Venom Spray to destroy hordes even more effectively.

Cryo Glaive can only ice a couple of enemies, but it's a primer that will grant you an ice aura when you detonate it. Ice aura is good for an interceptor because it freezes nearby enemies and stops them from dealing damage. In harder modes and strongholds where enemies hit harder this might be the build to use. Again, detonate with Tempest Strike for big damage.

The Interceptor is a contradictory class in some ways. The dual knives and close combat specialty implies that they're a hero-assassinating rogue class but they actually clear mobs well, and very large bosses like Titans and Stronghold bosses tend to quickly stomp Interceptors at close range. In these instances the Interceptor becomes more of a support class, using combos to clear mobs while inflicting status effects on the boss where possible.

In terms of support systems, the status-clearing Rally Cry can occasionally be useful in co-ordinated play, but Target Beacon, which causes a target to take more damage from all sources, is always useful, and should be your default support system. An enemy that is tagged with Target Beacon and Acid will be taking tons of damage from your teammates.

Your ultimate locks you into melee attacks, but it makes you invincible and lasts for ages. Activate this to do damage to huge bosses that would otherwise swat you down, or use it to escape a certain death situation. The super recharges fairly quickly, so don't be shy about using it to chew through a difficult mob. It will burst down Epic and Legendary enemies in short order.

Combos are so powerful in Anthem that it's hard to justify taking an ability that isn't a primer or a detonator, which is sad news for many of the Interceptor's attacks. I've listed them roughly in order of usefulness, with primers and detonators towards the top of the list. Venom Bomb, Cryo Glaive, Tempest Strike, and Venom Spray have been the standout skills from my 25 hours with the game so far.

Note that as I write this many of the skill descriptions you see in the Forge are inaccurate, and don't correctly display which skills are primers and detonators. Also there's a chance you might see some great drops on poorer skills that make them more viable than they seem initially.

Venom Bomb: A primer that deals Acid damage and inflicts the Acid status effect. Very effective against large groups of weak enemies. Hold down the button to get an aiming reticule that will show you precisely where the bomb will land.

Cryo Glaive: A primer that deals frost damage. The description says it locks onto a maximum of five targets, but I've only ever seen it hit two at a time (the official Anthem site also says this ability targets two enemies). The attack freezes enemies and sets them up for a detonator.

Spark Dash: A powerful detonator that's hard to aim. The Dash tends to boost in the direction the Interceptor is facing rather than where the camera is facing, which makes it easy to go hurtling off sideways and hit nothing.

Searching Glaive: A homing throwing star that does high single-target damage. It's not a primer or a detonator.

Cluster Mine: The Interceptor's most useless ability. It's not a primer or a detonator, and enemies have to step right on them to set them off. There are far better ways of dealing damage in an area.

Tempest Strike: A detonator that does huge single-target damage. It's basically a pumped-up melee attack which means you can also use it from the air to slam down into primed enemies.

Detonating Strike: Because Anthem is, in many ways, a mess, Detonating Strike is not a detonator. It is an electrical primer with a very short range. That means this is the only way you can gain an electrical aura playing solo as the Interceptor. It does middling damage but the electricity aura you get for comboing off it will zap nearby enemies, and cause them to zap their friends. It's flashy, but not the most efficient way of dealing damage to multiple enemies. Killing an enemy with this ability causes them to blow up, which is cool, but again not as efficient as Venom Bomb melee comboing a group.

Venom Spray: A very powerful short range shotgun blast of Acid damage. Some corners of the Internet suggest this inflicts the Acid status effect, but I have tried repeatedly to test this on a few bosses and couldn't get it to trigger, while it always does with Venom Bomb. Anyway, this attack absolutely dissolves enemy health bars. If you don't want to take Tempest Strike to detonate your combos, Venom Spray is a good high-damage alternative that can burst down mobs.

Wraith Strike: A projectile attack that hits one enemy and then chains to one enemy closest to your target. The description suggests this 'warps' enemies, but it doesn't appear to inflict any status and it's not a primer or a detonator. If you're close enough to use Wraith Strike you might as well get a little closer and use Venom Spray instead to do a lot more damage to more targets.

Plasma Star: It's not a primer or a detonator, but it does significant damage to individual enemies and you can throw a bunch in quick succession. There are better ways to damage single enemies and frankly the skill feels weak and boring to use. The description suggests it has some armour penetrating capabilities but in practice I haven't noticed it being more effective against tough enemies.

A big fat shotgun is the most fun option, because you can use them to deal ultra damage at melee range while your abilities are recharging. You will get stuck looking for a window to reload though, so machine pistols with a large clip are a more sensible option. Much depends on the stat rolls you get on your gun pickups. A powerful assault rifle still works great at close range. Keep a sniper rifle or a marksman rifle in the secondary slot in case you somehow get caught at long range.