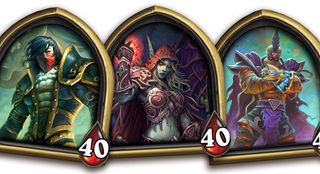 Normally, the week before a new Hearthstone expansion lands finds the game at its most stale. Which, okay, is true of the current constructed ladder, but is less of a problem because players are having so much fun in the Battlegrounds mode. A new patch has just gone live which sees a trio of new heroes are joining the party, and a pair of familiar faces also returning from a tune-up in Team 5's workshop.

A number of balance changes to heroes and minions have also been made, and a new stats page is now available to players who own at least ten Descent of Dragons card packs.

Millificent Manastorm and Lich Baz'hial, who left the Battlegrounds in November, are returning to the fight, while Patches the Pirate, Bartendotron, Pyramad, Professor Putricide, and Trade Prince Gallywix are now out—but could be back sometime down the road. There are also a pair of new minions on the field, King Bagurgle, which should be a big boost to Murloc comps, and Floating Watcher.

The Advanced Stats screen is available from the Battlegrounds lobby, but, as mentioned, is only available to players who own at least ten card packs from the new Descent of Dragons expansion. It's still fairly basic but will display data from matches going back to November 5, and Blizzard said that more features and stat tracking will be added in future updates. It also warned that players on "low-end devices" might notice some performance issues following this update, but said that it's continuing to work to optimize the game and will have more information on that to share soon.

It's still very early days for Hearthstone Battlegrounds, which went into open beta less than a month ago, but so far it seems to be going very well for Blizzard: In our recent look at the making of the game, associate designer Conor Kou told us that the competitive community has embraced the game, even though it's not intended as a competitive mode, and "created a great experience for viewers."

And finally, the full rundown of balance changes: