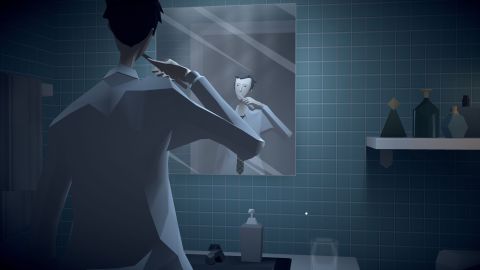 A game about breaking free from monotony that gets, perhaps inevitably, a little monotonous.

You wake up. You grab your phone to switch off the alarm, then stare blearily at it until you're already late for work. You brush your teeth, making eye contact in the bathroom mirror with the hollowed-out thing you've become. As game loops go, it's not exactly shoot, reposition, reload, is it? But then, this is pretty much Mosaic's sales pitch: forget the straightforward thrills of action and/or adventure, here's a game that simulates the tedious grind of everyday life.

Using point-and-click controls, you drag your character—an anonymous office worker with a wonky tie, a smartphone and not much else in the way of a discernible personality—through this loop five times, a full working week of low-level misery. Which raises the question: why would you want a second life that's just as rubbish as the first?

If Mosaic was able to answer for itself, I suspect it'd be a mumble about art and mirrors and reflecting reality. And there are some sharply observed moments here, like the daily elevator ride you share with two strangers. The only control you have over your character is which way he looks, and if you so much as glance in a stranger's direction, they'll do everything in their power to avoid meeting your eyes. At which point, you realise there is actually a second thing you can do: whip your phone out, and stare at that instead.

At which point, maybe you'll open up BlipBlop, probably the single most barbed bit of satire in the entire game. BlipBlop is one of the apps preloaded on your in-game phone, a clicker game with all of the theming ripped clean out to expose its inner workings: flashing lights and pleasing bloops and numbers that keep getting bigger. It is, without any pretence, a hole to pour your time into, a button to hurt your fingers on. And yet it still completely works. I wince at how much of the four hours I spent with Mosaic was dicking around about on my phone instead of getting on with the day.

There you go. That's the big message Mosaic has to impart. Modern life, eh? We're all scared of one another and we're always looking at our screens. Bitcoin!

It's not wrong, exactly, but I'm not sure it ever cuts any deeper than Daniel Ortberg's withering Black Mirror synopsis, "what if phones but too much".

Being fair for a moment, this does mean Mosaic has something to say. But it feels thin here because the entire game is just a housing for this message. Mosaic is a point-and-click adventure, but I use that last word under advisement. There are no real puzzles to speak of, or gags and insights to be accessed by clicking on background details. For the most part, you move from left to right as the story happens, like scrubbing through a YouTube video.

There are exceptions, mind. Every day, when you arrive at work, Mosaic switches from its 2.5D world to a flat hex-based grid. Your character's office job is apparently playing a very simple strategy game, where you build outwards and upwards until you reach a given milestone and clock off. It's a decent evocation of the daily grind without actually forcing you to type numbers into a spreadsheet, even if it's ill-explained and undeveloped as a game in its own right. Which might be a stroke of genius, the game standing in for your job being just slightly less compelling than the blatant dopamine feeder that is BlipBlop.

And then there are the occasional bright spots you find along your commute. I mean bright literally—sudden bursts of colour and rounded shapes that disrupt the game's tightly-controlled visuals, as you watch a butterfly or listen to a street musician or just sink into your own imagination. These moments are presented as off the beaten path, and some of them even are, toying with those well-trained gamer instincts that, if you're supposed to go right, you should try heading left first.

Your efforts will be rewarded with a flash of striking imagery: yer man floating in a sunset, a thousand miles away from the grey tones of real life, or fantasising about a distant office complex crumbling like the end of Fight Club. If I had to make a case for the monotonous second life of Mosaic, these moments would be my Exhibit A.

Because this is an undeniably eye-catching game. Mosaic's house style is minimalist: limited palette, deliberately low-poly models, a smooth blank where everyone except your character's face should be. This is pretty much the modern indie-game school uniform, a sampling of visual ideas you might've seen in Ashen and Absolver and Inside, but it works. And then, vitally, Mosaic breaks those rules, messing with the shape of your character or casting dusty sunbeams more textured than the surfaces they land on or just introducing some damned colour to proceedings.

The overall effect is of a particularly well-made Radiohead fan video. As someone who spent most of their teens on long meaningful walks with Kid A in the headphones, I don't even necessarily mean that as a bad thing. But it might grate on you. There's an eagerness, in Mosaic's presentation and its experiments with repetition, to constantly remind you that this is art, actually. And yet its grand thematic underpinnings, you could fit into a tweet—one with the old 140 character limit, even.

So you might consider that question, why you'd want to live someone else's tedious life and conclude that, frankly, you don't. And you wouldn't be wrong, exactly. But Mosaic is at least an occasionally fascinating way of boring yourself.

A game about breaking free from monotony that gets, perhaps inevitably, a little monotonous.