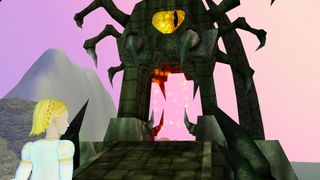 World of Warcraft gets a lot of attention for being the king of the MMO hill, and for good reason: It's been around for more than a decade, and it continues to pull in multiple hojillions of dollars every month. But Daybreak Games announced the release of the 22nd expansion to Everquest today (and the 12th for Everquest 2) and any game that can stick around long enough to notch up that many add-ons deserves some attention too.

Everquest: The Broken Mirror pits players against the vengeful goddess Anashti Sul across four new zones and three revamped ones, plus instanced, scalabe versions of the Plane of Hate and Plane of Fear for level 75-105 raids. It adds new quests, missions, spells, Alternate Advancements, and more, plus "a convenient Illusion Key Ring" that enables players to access their favorite personal character illusions from a single tab.

Meanwhile, over at Everquest 2, it's time for Terrors of Thalumbra, "a sprawling, subterranean realm of lost treasures and ancient horrors" that exists deep below the surface of Norrath. Terrors of Thalumbra includes a new contested zone and special quests for Adventure and Tradeskill players, "level-agnostic" scalable dungeons for players level 20-94, new raid zones, advanced solo dungeons for level 100 players, and a new Item Infusion upgrade system.

Everquest: The Broken Mirror will be available on November 18, while EQ2: Terrors of Thalumbra is live now. (The Everquest 2 site is down for maintenance at the moment, but that link should take you where you need to be once it's back.)