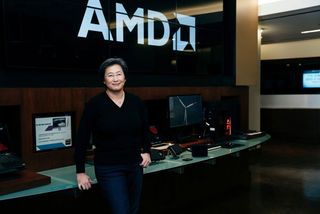 The new year is finally here, which means the Consumer Electronics Show is quickly approaching. It was already inevitable that AMD would make an appearance at CES 2020, but now we have an exact date: January 6th.

AMD announced today that it will hold its CES press conference on January 6th at 2PM Pacific Time. A live stream will be available on the company's YouTube channel, and the event will be hosted by AMD President and CEO Dr. Lisa Su.

At #CES2020, AMD will push the envelope yet again to make 2020 an incredible year for high-performance computing. Join us for our press conference on Monday, January 6th at 2PM PT on YouTube!December 31, 2019

AMD promises to "push the envelope yet again," so there should be at least a few interesting reveals. It's likely that AMD will release fourth-generation Ryzen CPUs sometime in 2020, so a CES announcement isn't out of the question. A new Threadripper 3980X processor with 48 cores and 96 threads might also be revealed, according to evidence discovered in the latest version of CPU-Z. Perhaps

There could also be a few new graphics cards. AMD spent last year's CES talking about the Radeon VII, which was the company's first 7nm graphics card. At the very least, the recently-leaked Radeon RX 5600 XT seems likely to be revealed at CES 2020. Perhaps AMD will finally release GPUs capable of ray tracing?

AMD is also widely expected to be developing hardware for the PlayStation 5 and Xbox Series X (both the PlayStation 4 and Xbox One use AMD-created GPUs), so we might even hear a few new details about those consoles. Sony already said the PS5 will support ray-tracing, so if AMD is indeed creating the hardware again, that lends more credibility to the idea that a ray-tracing GPU could be announced.

No matter what gets announced, it will be exciting to see what AMD has in store for the new decade.