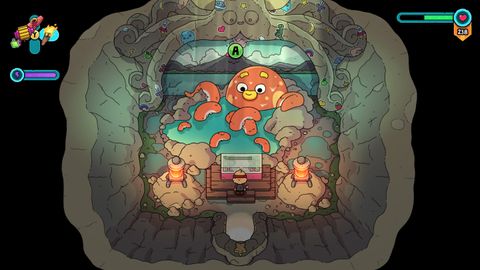 Familiar, lightweight but almost impossible to dislike, this is an effortlessly enjoyable action RPG.

Four days to save the world? It doesn’t sound like much, but having a solid deadline at least gives you a chance to prepare for impending doom in this cheery, likeable action RPG. Once every 100 years, the evil witch Mormo descends on the eponymous island village; you, inevitably, are the chosen one, a warrior of legend charged with stopping her. Sharp swordsmanship is key, but not as important as efficient time management. Whether you can stay focused in a world of distractions, however, is another matter entirely.

The status quo is briskly established, as your first hero is brought before the witch and killed in an instant. A century later, another youngster wakes up to discover that they’ve been chosen as the new Sword of Ditto, as spirit guide Puku—think Obi-Wan but a dung beetle—invites you to claim the last hero’s sword from their resting place in the local graveyard. The cycle is repeated every time you die, though eventually you’ll find ways and means to give future generations more of a fighting chance against Mormo.

Your first job is to destroy two crystal ‘anchors’, in theory to weaken Mormo’s power and make that climactic challenge a little less overwhelming. Then again, your actual first job is to obtain a special toy, which lies within another dungeon, to unlock the one that leads to the first anchor. But before that, you’ll want to buy a few health items to increase your chances of success. And to afford those, you’ll need to grab coins from cutting grass, reading signs, and killing enemies—from skulls with wings to poison-puking zombies, and armoured knights whose ground-shaking footsteps you can hear from half a screen away. In the meantime, there’s a suspicious hole just behind that cluster of flying skulls, a couple of mysterious crates that have washed up on the beach, and a small penguin that keeps running off whenever you approach. And, oh, look, now there are only three days left.

The Swords of Ditto is full of these kind of pleasantly stressful moments, where you find yourself setting an objective from which you get continually sidetracked as you try to cram in as much as you can before the hourglass runs dry. As with the best roguelites, it’s a game where you learn more about the rules and idiosyncrasies of the world with every run, figuring out little ways to accelerate your progress—even as the layout of the overworld and dungeons changes with each generation to keep you on your toes. During one adventure, you’ll save up for a vinegar-soaked conker to whack your enemies; in the next you’ll find a rare sticker that lets you trail fire during a dodge-roll. Better still, you’ll get the chance to earn a stay of execution, winding the clock back a day so you can properly tool up for the final fight.

Combat is fairly rudimentary stab-stab-roll stuff, though it has a couple of neat ideas. Landing melee attacks, for example, refills a magic gauge that powers special weapons—from a drone you can remote-detonate to a spinning vinyl record that slices through mobs before returning to your hand. It’s a combination of this oddball charm and attention to minutiae that prove the making of the game—from the way pots, skulls and other destructible items shatter so satisfyingly into a mess of tiny fragments, to the fulsome thwack of a golf club that sends enemies hurtling into walls, leaving them stunned and seeing stars.

The world, too, looks more dilapidated after successive failures. Triumph, and the next hero will wake up to a town in pristine condition, its residents seeming happier as a result. Even in the game’s darker moments, it’s a game that faces catastrophe with a grin, aided by economical, characterful writing that trades in silly and surreal humour without bogging down the action in needlessly florid dialogue. And if you want a bit more story, then there’s a wealth of lore found in collectable tablets: these are all held in a museum exhibit, one of the few permanent fixtures of a world in flux.

Even once Mormo has been vanquished, things change often enough to make repeat visits worthwhile, yet the challenge remains fairly consistent. Enemy levels scale for each new generation, so even if your sword has gained a few levels (with your health gauge boosted accordingly) you still can’t take those belching rats and floating brains for granted. And sure, the village’s new layout will lead you down a few frustrating cul-de-sacs, but by then you should have accrued more time to afford the odd wasted journey. It may not do anything sparklingly new and exciting, but with or without a co-op partner—who can drop in and out with little hassle—The Swords of Ditto is a quietly compulsive treat.

The Swords of Ditto

Familiar, lightweight but almost impossible to dislike, this is an effortlessly enjoyable action RPG.