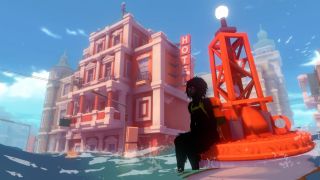 EA's hoping to remind us all that it's still in the game subscription service by announcing the next wave of games to come to its Origin Access platform this month.

First off, Jo-Mei Games' loneliness-fuelled adventure Sea of Solitude is making the leap from Origin Access Premiere to the cheaper Basic tier. It's a gorgeous game, although it sometimes loses sight of its central themes, as James says in his review. There's also a very good TED talk about the game's goal of tackling loneliness.

Also coming to the Basic tier is Legrand Legacy: Tale of the Fatebounds, an indie RPG inspired by retro JRPGs. Usually 'inspired by JRPGs' tends to mean a 16-bit, top-down affair, but interestingly Legrand Legacy seems to be more inspired by early 3D games like Legend of Dragoon and Final Fantasy X.

The final addition to the Basic tier is Worms WMD. A return to the 2D tactics that defined the series, it's by far the closest modern entries in the series have come to the much-beloved Worms Armageddon. It's also one of the best local multiplayer games currently available, so if you want to blow up your friend with a grenade, now is the best time to do it.

The more expensive Premier tier is also getting a new addition in the form of Mable & the Wood. There's more than a hint of Wonder Boy to Triplevision Games' metroidvania, as the core mechanic is the ability to shapeshift into the many bosses you defeat. Interestingly, there's also a pacifist route to let you beat the game without needing to kill a single enemy. While it only has a mixed rating on Steam, I adore Wonder Boy and its modern interpretations, so this is one I’ll definitely be adding to my downloads.

Compared to December's colossal lineup of additions, including Wreckfest, Bloodstained: Ritual of the Night and Superhot, January's offerings seem a bit less exciting, especially for Premier subscribers who shell out more each month. Despite that, Origin Access still features one of the largest collection of games out of any of the subscription services (like Games Pass for PC, Uplay+ or Humble Trove), so a neat looking metroidvania and JRPG is more than enough for me.