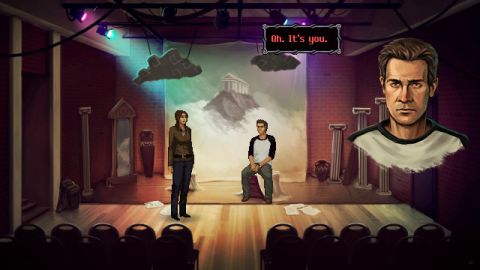 If you’ve ever woken up after a wild night out and cringed as a friend recounted every embarrassing thing you did, you’ll resonate with Unavowed. Except the main character didn’t drink too many Caipirinhas at happy hour and get thrown out of a club for being sick on the dancefloor: they were possessed by a demon who used their body to go on a murderous rampage across New York City.

Unavowed begins as the demon is being forcibly extracted from you on a rain-lashed rooftop. In this dramatic intro you decide whether you’re playing as a man or a woman and choose from three backgrounds—actor, cop, or bartender—each of which has its own origin story and unlocks unique dialogue options later in the story.

This is one example of how Unavowed seasons its familiar point-and-click adventure template with light role-playing elements. I love it, because you rarely get to choose who you play as in these games, but it does take some getting used to. Whether it’s Guybrush Threepwood, George Stobbart, or Manny Calavera, graphic adventures are often defined by strong lead characters. Here the protagonist feels much more like a blank cipher for the player.

Shortly after the exorcism you join a secret paranormal police force called the Unavowed. For thousands of years they’ve been protecting the ‘mundanes’ (regular, non-magical people) from ghosts, demons, monsters, and other threats. Work had dried up lately, but your possession sparks a surge of supernatural events that give the Unavowed more work than they’ve had in decades.

In another example of genres colliding, you can choose which Unavowed members to take on a mission with you, essentially forming a party. They have conversations with each other and give you hints about what to do next, but more practically, you can use their powers to help you solve puzzles and bypass obstacles. Eli, for example, is a mage who can conjure up fire, while Mandana, a Jinn, wields a sword. I can’t give specific examples for fear of ruining puzzle solutions, but one involving a sprinkler system was particularly clever.

At first you don’t remember what you—or, rather, that pesky demon—did while you were possessed. But as you retrace your steps, meet survivors, and discover clues about your past, the blanks are filled in. The anthology-like structure works really well, because you’re never quite sure what kind of bizarre, paranormal weirdness each mission will throw at you, but there’s also a larger, well-told story connecting everything to give it some thematic consistency.

Unavowed is also incredibly atmospheric. The shadowy, rain-soaked streets of New York provide an evocative backdrop for its urban fantasy, and the marriage of the everyday with the supernatural is classily done. The detailed background art by Wadjet Eye regular Ben Chandler are the highlight, with tasteful, considered use of light and shadow making the city ooze dark mystery. Throw in a jazzy, downbeat film noir soundtrack and you have a world that’s very easy to get lost in.

Between missions you can explore the Unavowed’s headquarters and have long, revealing conversations with your companions, which reminds me a lot of Commander Shepard and their interactions with the crew of the Normandy in Mass Effect. There’s a lot of dialogue, all of which is voiced except for the protagonist, who remains mute throughout. The characters are nuanced and interesting, and have backstories that are genuinely worth uncovering.

Puzzles are mostly the usual point-and-click fare, but a bit smarter and less obtuse than I’ve come to expect from the genre. More than once I felt a surge of satisfaction for divining the solution to something that wasn’t immediately obvious, and any adventure game that gives me that feeling is doing something right. Some require slight leaps of logic that adventure-trained brains will be used to, but most of the time you just have to be observant, paying attention to clues and dialogue, which makes the cop origin story feel like a neat fit.

Unavowed is another fantastic adventure from Wadjet Eye, and it’s great to see studio founder Dave Gilbert back in the saddle. The humour didn’t always land for me and some of the voice acting is a little iffy, but otherwise this is a fine example of a modern point-and-click adventure. The addition of character customisation and companions doesn’t sound like much, but it massively changes the feel of the game, even if other aspects, such as the puzzles, are still steeped in the past. The next time you wake up with a sore head and no memory of the night before, be thankful you didn’t leave a trail of death in your wake.