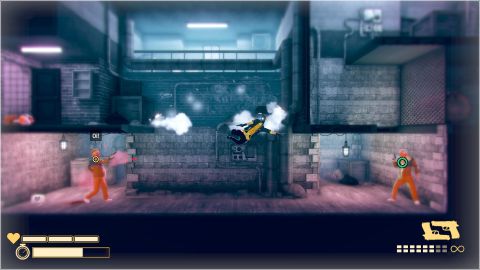 Breezy fun that also rewards combo-chasing mastery. Barrel through the story once for a laugh, then replay the best levels until you are John Wick on a skateboard.

The gamers running at me have swords, because all gamers own swords, I guess. They also have Monty Python Dark Souls cosplay armor, but it can't save them from the shotgun blasts that reduce them to lumps at my feet. I'm out of ammo before I'm out of gamers, the last one charging with sword held high. But any object you kick is a one-shot kill in this game, and dead gamer lumps are kickable objects.

There are more impressive gun-fu stunts in My Friend Pedro than breaking somebody's neck by kicking their dead friend's torso at them, but this moment of improvisation is typical of what happens between gif-able highlights. Once or twice per level I'll do something like skateboard through a window and then kick that skateboard at someone while shooting someone else, or I'll throw a frying pan into the air and then ricochet bullets off it to clear a room.

But the meat and potatoes of My Friend Pedro isn't these set pieces. It's jumping in and relying on the combination of a generous slow-mo meter, physics objects, and a lot of bullets to see you through.

This shit is bananas

I should mention the talking banana. His name is Pedro and he's full of potassium and advice on how to kill people, whether retired mafiosi or Christmas-themed bounty hunters or gamers driven to madness by violent videogames. There's a story in My Friend Pedro but a minimal one—it feels like the plot of another hyperviolent Devolver game, Ruiner, only told on fast-forward. Pedro is there to explain things, but more importantly he appears in the corner of the screen when you pull off a high-scoring combo and tells you what rank you got at the end of a level.

It's a score-attack game, with bonus points for chaining together kills in combos. There are leaderboards, and I have replayed several levels just to get a higher rank than James. (Suck it, James.) Chasing high scores makes me look ahead at a level and think things like, "I should ride the barrel onto that guy then jump off while dual-wielding and split my fire so I can shoot that one and the other before I land."

Split-fire looked neat in the gifs Pedro's designer showed off during development, but I was worried it would feel rough in play. I was super wrong. It's easy: right-click on one dude and hold to lock him in, and then for every left-click shot, no matter where it's aimed, the right-click guy gets a bullet as well. Levels that drop you down shafts with enemies on both sides, or have doors full of goons opening around you, are built for this. I never stopped enjoying it.

These are also fine moments for dodging by pressing W, which sends you into a bulletproof pirouette. Shooting while dodging sends bullets flying in whichever direction your guns happen to be pointing during that part of the animation, wild sprays flying around as you whirl about like a dog in a tumble dryer. Again: enjoyable.

Later levels reduce the number of physics objects like skateboards, basketballs, and knives, as well as goons to fling them at, in favor of mines, lasers, spinning platforms, and traps that require more perfectionist play. There's not as much freedom to rack up combos and a lot more falling to your death. They're less fun to replay, and I wish there were notes in the level select screen that said "this level is cool and has a skateboard" or "this one has too many lasers". There's one in the dream-like midsection with no enemies, a pure platforming challenge that doesn't play to My Friend Pedro's strengths.

So some levels are weaker, but before long there's always a refresher level that plays completely differently, a motorbike chase or a freefall or a boss fight. To pay My Friend Pedro the highest compliment, its boss fights didn't annoy me. They're bombastic, inventive, and they're over fast.

Along with the score, at the end of every level Pedro gives you a gif of a highlight to save or share. Postcards from murderland, they slice My Friend Pedro into a handful of enjoyable seconds. Its take on bullet-time is fun for more than seconds, though. Unlike Superhot or Max Payne I never got tired of its bullet-time thanks to short levels, high variety, and a storyline that's purest nonsense.

Breezy fun that also rewards combo-chasing mastery. Barrel through the story once for a laugh, then replay the best levels until you are John Wick on a skateboard.