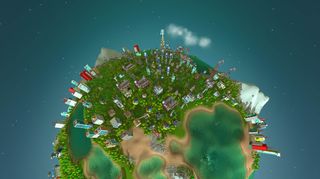 Crytivo has announced that god game The Universim is entering Beta alongside an update improving the scale of the game’s planets. The Universim is a hugely ambitious crowdfunded god game that seeks to create a civilization-building experience from the earliest days of neolithic life to a planets-spanning galactic civilization. The next big update for the game will take it into official beta status, and improves several aspects of the game—but focuses primarily on updating the parts of it that generate new worlds. Planets are now larger, filled with more things, and have fancier mountains. They also generate faster to boot.

All these updates prepare the way for the implementation of alien worlds for players to expand their civilizations to, including a Space Age for the Nuggets. The update will also improve AI pathfinding, theoretically eliminating a pesky bug where your little nuggets would stand about doing nothing. Our Christopher Livingston tried out The Universim last year and mostly did a lot of murdering his own people on accident.

The beta announcement comes nearly six years after The Universim first sought crowdfunding support through Kickstarter. You can find The Universim on Steam, on GOG, and here’s a trailer: