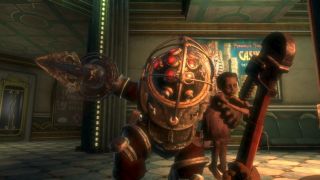 2K has announced the creation of a new studio, Cloud Chamber—news that is made considerably more exciting with the accompanying announcement that the studio is developing the next BioShock game.

Last year, rumours surfaced that 2K had put a secret studio to work on a project code-named 'Parkside', which was allegedly a new BioShock game. A recent job listing and earnings report only fuelled the rumours, which seem to have been accurate.

Beyond the fact that it's in development, however, we know very little so far. Cloud Chamber's studio head, Kelley Gilmore, comes from Firaxis games, and 2K makes the slightly embarrassing boast that she's the first woman to run a 2K studio, despite being founded in 2005. Other members of the team also worked on the original BioShock.

The name and setting both remain a mystery, though we know it's an FPS, not surprisingly. We'll have plenty of time to find out more, however, as development is expected to take several years.