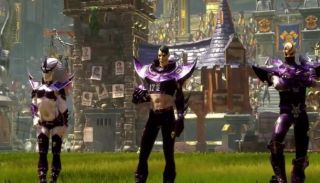 It's natural, I think, to assume that certain teams in Blood Bowl 2 will have an inherent advantage in this ultra-violent version of (literally) fantasy football: Orcs, Chaos, maybe Dwarves—the thick-necked bruisers, in other words. The reedy Dark Elves? Not so much at first glance. But then one of them pulls a foot-long shank, and there's no flag on the play.

The Dark Elves are all about speed. "Dark Elf teams prefer a malevolent and spiteful running game over the passing of their goodly cousins," publisher Focus Home Interactive explained on YouTube. "Backed up by the ruthless Witch Elves and dangerous assassins, a Dark Elf team has all the tools to power through rather than around any opposition line. Dark Elves are very agile, and each of their players is a potential thrower, catcher and more importantly, scorer."

But as the old saying goes, it's not how hard you hit, it's how hard you can get hit and keep moving forward. In that respect the Dark Elves can sometimes end up over their heads, and replacing players who have been "accidentally" killed can be an expensive proposition. Check Dark Elves out in action above, if only to marvel at quite how whoopee cushion at a funeral unfunny the commentary is.

Blood Bowl 2 is available for preorder now on Steam, and will be out on September 22.