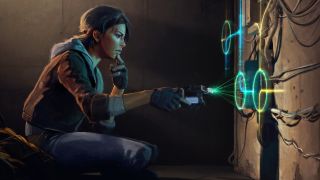 We've nearly made it through the first month of 2020, and the year is reconfiguring before us. Last week, we learned that Cyberpunk 2077 and Marvel's Avengers have been delayed, and this week Dying Light 2 was also pushed back. But, apparently, we've passed into a bubble of spacetime in which Valve is really, truly ready to publish a new Half-Life game. Here are the biggest PC gaming stories of the week:

Last week was characterized by delays, so let's start with a non-delay. Valve's big bet on VR is done, apparently, and so there's no concern about a Half-Life: Alyx delay—it'll still come out sometime in March. If you were hoping you had more time to save up for the hardware needed to play it, I'm sorry. Valve has apparently become punctual.

Being 'muted' in a game does not violate your civil rights, US federal court declares

Shockingly, the courts did not agree with a man who described his experience with Runescape mods as a violation of his human rights.

Nice of isabelle to offer some coffee to Doom Guy before a long day of demon slaughtering 💛#DOOM #AnimalCrossing pic.twitter.com/2kAPbDqPrjNovember 24, 2018

Jarred was not too impressed with AMD's eleventh hour BIOS update, which at the least will cause confusion. If a 5600 XT card is in your future, read Jarred's breakdown of the situation to make sure you know what you're getting.

Controversies over loot boxes have died down over the past year, but the debates—which have expanded from forums and subbreddits to legislators and government officials—are far from settled. Here's another report that probably induced some game industry CEO frowns.

WoW players weren't the only ones grumbling this week: Tim, Phil, and Tom discussed the state of Destiny 2 and the frustration over the underwhelming reward for solving its latest puzzle (which itself was cool, if you like watching streamers do something that looks like genome mapping).

Meanwhile, Wes and Andy Kelly have both played Doom Eternal: Here's Wes on how it felt ("metal as hell"), Wes and Andy on what they liked and didn't like, and Andy on the decor and personal items found in Doom Slayer's bedroom. He's just a regular guy when he isn't cleaving demons in half.

Also this week, Steven and Emma took a look at League of Legends card game Legends of Runeterra—here's how its microtransactions work, a guide to the basic rules, and a primer on the cards and their abilities. It's in open beta now.

Chris attempted to speak and make eye contact like a normal human being in Speaking Simulator—because he certainly isn't a robot—and had mixed results. His ear came off, for one thing. He also made an honest effort to govern in Frostpunk's next expansion, The Last Autumn, but was immediately fired by a union. Always with the misadventures, that guy.

Finally, Lauren learned a lot more about The Elder Scrolls Online's upcoming trip to Skyrim: It isn't retelling the Skyrim stories we've already experienced in The Elder Scrolls 5, and the subterranean land of Blackreach is going to be a big part of it. That's either a promise or a threat depending on how you felt about Blackreach the last time you visited.

Have a great weekend, and if you've seen the Apple Software Update prompt pop up on your PC recently, do yourself a favor and finally get around to uninstalling iTunes. When was the last time you used iTunes?