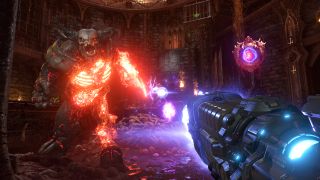 Last week, Bethesda and id Software invited us to play a big, polished chunk of Doom Eternal, the loud, lavish sequel to the superb 2016 reboot. This demo contained the first 2-3 hours of the game, which Andy and Wes both played. Wes loved it; Andy enjoyed it, but had some concerns. So here’s a casual discussion about what they played, what they liked, and what they didn’t as much. Let’s rip (and tear) into it.

Wes: Remember when the US Congress held hearings about violent videogames back in the '90s? If Doom Eternal had been around back then, instead of Mortal Kombat, I think politicians would've actually lost their minds. In the first 10 minutes of this game you pull a demon's head off his body with your bare hands, and the melee finishers you're performing constantly are just nasty. This game revels in being cartoonishly violent. While it's super detailed, it's so ridiculously over the top that it's hard not to just cackle maniacally the whole time. I haven't played a shooter in ages that demanded I be this on the entire time I'm in combat, just tearing through enemies non-stop. I really enjoyed playing Doom Eternal, but I also felt like I needed a nap afterwards—it's so draining. I heard you came away from your play session (which was the same as mine) with some reservations, Andy. Were you down on the game as a whole, or are there a few small things worrying you?

Andy: Draining is the word. Doom Eternal is a good game, don’t get me wrong—just one that I’ll enjoy in shorter bursts when I play it at home. The relentless pace and non-stop chaos will appeal to a lot of people, but I prefer a little more space in my games. There was a moment in my demo where I was exploring the Fortress of Doom, the Slayer’s spaceship, and that was the only time I felt like I could actually soak in my surroundings. The rest of the time it was all just so breathless that I never really got a chance to stop and process what was happening—or take in that amazing environment art. The screenshots and trailers don’t fully do the game justice, by the way: it looks really stunning in motion, especially at a blistering frame rate on a high-end PC. It’s just so chunky.

Wes: There was a part fairly early on where I spent a few peaceful moments in the courtyard of some ancient warrior temple (I won't pretend to really follow the lore here), and had a similar feeling of man, this is gorgeous. It also wasn't on fire or coated with blood, which is kind of the aesthetic I expected. The artists did really get to create much more interesting environments this time around, but for the most part you are blitzing through them. I had a suspicion your issue with Eternal was going to be what you've just said, though; id was clearly so focused on adding layers to Doom's combat, the pacing may have suffered for it.

Andy: Even though the environment around me kept changing—and there’s some fantastic visual variety here, especially compared to the 2016 reboot—I still felt like I was only doing slight variations of the same thing. Enter arena, exit is blocked off, demons spawn, kill demons, exit opens up. The layout of the arenas changed, as did the combinations of demons, but I still felt like I was going through the motions at times. But hey, that could be my fault. Doom Eternal is a game that rewards creativity; combining traversal, weapons, and powers in interesting ways. The more I play Eternal, and the more comfortable I get with its arsenal, the more variety I think will emerge. We’ve both only seen a fraction of the game, only tested a handful of its weapons, so I’m excited to see what surprises are waiting down the line. I think Doom Eternal has some big secrets it’s yet to spill.

Wes: From the trailer we know there's a sword somewhere later in the game, and I am all about super powerful melee weapons in first person shooters. I'm with you on the feeling of going through the motions a bit, though, even in just three hours. Some people will read your distillation above and say "Well, that's any shooter." But Doom 2016, for example, was more balanced in how it paced out combat encounters with exploring its levels. You were engaging different parts of your brain, and that kept it engaging. In Eternal there's some really beautiful scenery to gawk at, and you can seek out side paths for secrets, but structurally it does feel a bit repetitive.

Having said that, though, every moment in combat I felt super engaged just trying not to die. On Ultraviolence mode Eternal definitely forced me to use every weapon in every fight, or I was toast.

Andy: I’m being quite negative here, but Doom Eternal is still a hell of a game—my issues with its repetition aside. In terms of how it feels it’s just magic; tactile, fast, responsive, and thrillingly violent. The art is incredibly detailed and evocative. Killing demons feels really crunchy and satisfying. It’s one of the most polished shooters I’ve played in a while. I also love how the combat almost feels like a rhythm action game, but instead of hitting the green button to respond to a green note, you’re instinctively launching a frag grenade when you see a Cacodemon (they lodge in their mouths, giving you an easy chance for a glory kill), or chainsawing a demon when your ammo runs low. There’s an amazing feeling of flow to the combat when you’re in the thick of a battle, and more than once I found myself genuinely forgetting to breathe when things were getting really intense.

Wes: Seriously, when I stood up to take a break I realized how tense I was. My chest was tight from the anxiety I felt trying to be hyper aware of my health, armor, ammo, and cooldowns in every fight. I'm definitely going to need more time before that stuff becomes second nature, but it is super satisfying when you use everything well and hit that flow state.

Andy: I was surprised to see so much platforming in the small portion of the game we played, and honestly, I’m not that into it. I quite enjoy the stuff where you can cling onto surfaces with a certain texture, leaping between them parkour-style. But there were some bits that were straight-up Mario, with platforms dropping into pools of lava after a few seconds and dodging rotating fire-sticks. It felt kinda… inorganic? Like someone had suddenly plonked a videogame in front of me. It tore me out of the illusion that I was an all-powerful demon slayer. In terms of first-person platforming it’s not the worst I’ve experienced, but it still felt kinda out of place to me here. But to be fair, I don’t think id minds that parts of Eternal feel gamey, which is evident in the power-ups and pick-ups, which are big, bright, spinning things straight out of an arcade game. I’m cool with this in theory; I just don’t enjoy jumping between platforms in first-person all that much.

Wes: I think the problem is the platforming just wasn't very interesting. It was linear and didn't engage my mind at all, the way exploring classic Doom levels would have me mapping out a 3D space in my head. That's what I missed most in Eternal. Give me some of those labyrinthine levels and I'll be happy. Still, it's hard to overstate how good the combat feels in this game. id's Hugo Martin told me that as hardcore as they tried to be with 2016's Doom, it wasn't really metal; it was really just rock 'n' roll. By comparison, he said Doom Eternal is speed metal, and I believe it. Your ship has a room called the Ripatorium, for god's sake.

Andy: People are going to go wild for Doom Eternal. There’s something inherently lovable about its brash, no-nonsense energy. It feels amazing in your hands, especially when that flow kicks in and you’re completely hypnotised by the violence. But after playing it for about two hours non-stop, I know that, at home, 40 minutes at a time will be enough for me. But that’s a taste thing: I prefer slower games. I just hope, in the final release, there isn’t quite as much platforming as this demo leads me to believe there will be, ‘cause jumping between platforms doesn’t feel particularly badass. I’m also looking forward to unlocking more weapons and mods—that’s when, I think, the combat will really open up. The more ways to slay demons, the merrier, right? It’s great to see id Software kicking ass in the FPS genre again, and this might be its most ostentatious game yet. I’m also hoping for some secrets based on classic Doom levels like we saw in the last game.