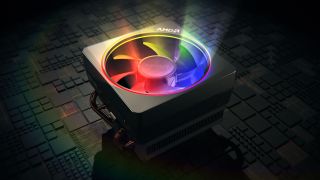 I got a little excited today after seeing images purporting to be an upgraded Wraith Prism RGB air cooler with two additional heatpipes, which popped up at XFastest. Unfortunately, though the shots of the supposedly upgraded cooler look real, they are not genuine AMD products.

This would have been interesting because heatpipes play an integral role in modern coolers. They typically consist of copper tubes with liquid inside. As the liquid heats up from the CPU at the base of the cooler, it turns into a gas and travels through the heatpipes, which extend through an aluminum finned block. The aluminum block and attached fan cools things down, and then the gas condenses and finds its way back to the base in liquid form to start the whole process over again.

Stock air coolers that come bundled with processors have not been terribly exciting over the years, though to AMD's credit, its Wraith coolers for Ryzen CPUs are pretty good. And as things stand, the Wraith Prism RGB is certainly serviceable, even if it's not among the best CPU coolers (when factoring in third-party alternatives). It comes bundled with several Ryzen processors, including the Ryzen 9 3900X, Ryzen 7 3800X, Ryzen 7 3700X, and Ryzen 7 2700X.

In mainstream territory, it's good enough for all but the 16-core/32-thread Ryzen 9 3950X. So the prospect of an upgraded version with six heatpipes (compared to four) was intriguing. I don't know that such a design would have been enough to cool the 3950X, but it could lend itself to better overclocking headroom and perhaps extend the time a CPU can run at its boost frequency.

It doesn't matter, because it doesn't exist.

"AMD is pleased to offer market-leading premium Wraith Cooler thermal solutions for socket AM4 and AMD Ryzen processors. Our current solutions, the details of which can be found at AMD Wraith cooling solutions, use four heat pipes and AMD has no plans at this time to introduce a new AMD Wraith Prism cooler with additional heat pipes," AMD told PC Gamer.

"It has come to our attention that third-party coolers using six heat pipes that are designed to look like an official AMD Wraith Prism solution, including the illegitimate use of AMD branding, are now entering the market. Please be aware that those solutions are not genuine AMD products and have not been tested and validated by AMD to meet our build quality and performance requirements. We are actively investigating the source of these products and will take necessary actions to enforce our rights to ensure users receive genuine AMD products. If you have any questions about the origin of a cooler, please verify the solution here."

With that statement, AMD seems to confirm that this is not a simple case of edited images making the rounds, but of actual illegitimate products "entering the market."

This is important, because if you purchase a CPU and it comes bundled with what appears to be an upgraded Wraith Prism RGB cooler, something nefarious is going on. Perhaps even the CPU has been swapped out.