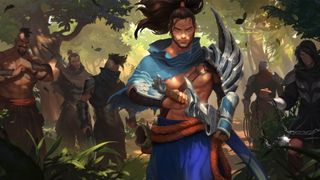 To perform well and win games, it's worth taking a closer look at the Legends of Runeterra cards and keywords as these will help you to understand how your deck works. Many units have special effects that can give them an advantage on the field. Spells can also be categorised based on their casting conditions.

Split into six regions, the Legends of Runeterra cards encompass a long list of powerful mechanics, from halting enemy attacks for a round, to having strong post-death effects. The open beta introduces many keywords, and more are likely to be added in the future, so I'll continue to update this guide. Simply refer back to this list when you need a refresher on how to effectively use your allies and spells.

There are several keywords that appear across the Legends of Runeterra cards descriptions. These cover effects, card behaviour, and basic actions.

A card’s abilities are highlighted in a small badge, underneath the name of the card. These keywords relate to units, who can have more than one ability.

Spells have three different cast times and may not always allow the enemy to respond. Check the keyword carefully to understand when the spell will cast during the match. If your opponent can respond, you will enter a back-and-forth sequence of spell casting with them.

Some spells have abilities that are classified similarly to the unit abilities mentioned above. So far, only one exists:

Champions are the only cards that can Level Up and require the player to meet specific conditions to do so. Having an empty hand, for example. Levelling a champion unlocks special abilities and increases their Power and Health stats, which upgrades all duplicates of their card, too.