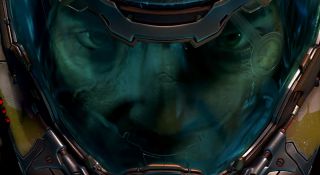 I thought I knew the Doom Slayer. I always saw him as violence personified. A muscular ball of fury who bled chainsaw fuel and shat bullets. But apparently, once the slaying has stopped, he likes nothing more than curling up with a comic book in his special little reading nook. This is the most shocking revelation from my recent hands-on with Doom Eternal, discovered in his quarters aboard the Fortress of Doom—the command station where he hangs out between missions. So, in the interest of learning more about the man stuffed into that armour, let's take a closer look at the Doom Slayer's bedroom.

At the entrance to the Slayer's room is big wooden barrel stuffed with a selection of dangerous-looking medieval weaponry. This makes perfect sense: the Doom Slayer is absolutely a man who would own multiple swords. And he's almost certainly subscribed to a bunch of YouTube channels run by guys with names like BushidoWayne and DragonBladeMaster, who post exhaustive 52-minute videos on the differences between longswords and broadswords.

I'm sure the Slayer uses this futuristic PC to receive intel on where Hell's demons are going to invade next. But look at that sick three-monitor setup and that mouse, which is clearly meant for playing first-person shooters. And the piles of snacks? C'mon, the Slayer is definitely a gamer. But what's on the PC? I'm guessing Winamp with a custom skin based on the cover art for Lateralus by Tool, mIRC (he refuses to use Slack), a folder filled with pictures of chainsaws, and one game in his Steam library: a copy of Devil Daggers, modded to be extra difficult. His desktop wallpaper appears to be a photo of an idyllic American town, which shows us that he's a sentimentalist at heart.

You'd think the Slayer would be utterly humourless, a man so driven in his quest to destroy the armies of Hell that the idea of cracking a smile never even crosses his mind. But cast your eyes across his desk—and the room at large—and you'll find a number of collectible toys, including this little mech. This is a man with a sense of humour; an appreciation for the small pleasures in life; an aesthetic. And if you're dead inside, you don't have any of these things. It's kinda heartbreaking imagining him sitting at his desk after a hard day's slaying, carefully arranging his little toys, looking wistfully at the peaceful town on his desktop wallpaper, dreaming of a simpler life.

Hell yeah. Of course the Doom Slayer has guitars displayed on his wall: of course he does. The one on the left appears to be made from the flesh of a demon he murdered, which is the most metal thing imaginable. Here's the thing, though—I don't think he plays. He just appreciates the culture; that's why they're on the wall. But what music is the Slayer into? I guarantee he has grabbed one of those guitars off the wall and air-jammed to Rational Gaze by Meshuggah. That has 100 percent happened—more than once. He's also into Slayer (obviously), Deicide, Pantera, Disturbed, Godflesh and Rage Against the Machine, which he considers a guilty pleasure. And if he's feeling introspective he might throw on a Tool album or Limp Bizkit's cover of Behind Blue Eyes, staring into a mirror, mouthing the lyrics to himself.

This is incredible. At some point, the Slayer dragged this armchair over to the corner of the room, set up a bookcase, and created a cosy little reading nook for himself. It's absolutely precious. I can picture him here, reading by candlelight at night, maybe wearing a bathrobe. Totally at peace. Alas, his reading material doesn't betray much about his inner self. It's mainly fantasy comic books. But hey, after a day spent mauling snarling demons with a chainsaw, the last thing you want to do is dive into War and Peace. I respect the Slayer's love of comic books. He's made peace with his love of low culture. Unpretentious.

Let's not forget that the Slayer is an intensely practical man. He brutalises demons with terrifying efficiency; the sign of a resourceful mind. So it makes sense that he'd have a workshop in his private quarters, where he seems to be tinkering with his armour—probably to make it more effective in battle. You don't get to be the best demon slayer in the universe by clocking off at 5:30 to go and read comic books in your nook. You have to put in the hours. There also appears to be an enormous dumbbell on the counter, which must be how he keeps his biceps enormous. But I imagine he uses the workshop for hobbies too. He's currently painting Warhammer, but is hoping to get into Gunpla once he's driven the demon invaders back to Hell.

Further proof that the Slayer is a nostalgic, sentimental soul. Next to his main rig he has a '90s gaming PC, which he's surely loaded up with the classics: Quake, Blood, Hexen, Redneck Rampage, and almost certainly Carmageddon. Obviously Doom would be on there if he didn't currently exist within the Doom universe. He could probably get an extradimensional shareware copy if he wanted, through a portal or something, but it would feel a bit like taking a break from work to work. While he spends most of his time on his main PC, he occasionally spins his chair around to play around on this old thing. It reminds him of simpler times. There's something comforting about the purity of that DOS prompt. Man, why did life have to get so complicated?