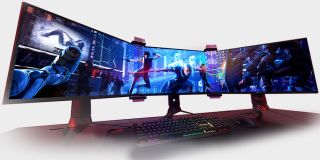 Monitor makers have made strides in designing displays with increasingly thin bezels, but they have not been able to make them disappear altogether. Enter Asus and its ROG Bezel-Free Kit (ABF01). It installs between monitors set at a precise angle and presto chango, the bezels disappear as if by magic.

It's not actual magic, though, but an optical illusion with the help of science (which I suppose you could argue is magic). Or more specifically, the visual trick relies on optical micro-structures. Installed at the right angle, it refracts light, bending it inward to hide the bezels and make it look like the image extends somewhat naturally from one monitor to the next.

Here's a before and after shot provided by Asus:

As shown, it's not totally natural to my eyes, because it looks like there is a strip of packing tape holding the monitors together. There's also a vice grip aesthetic at play. However, it does appear to keep the image intact better than a pair of bezels wedged together, which is the alternative.

Asus says the lenses in the kit are made from PET, a type of transparent thermoplastic that is more durable than glass. There is a slight bit of dimming—Asus claims it lets 90 percent of the light from the monitors shine through.

For this to work, monitors must sit at a 130-degree angle. There's probably a bit of leeway there, though I imagine it will diminish the effect if deviating too far from what Asus has determined to offer the "best balance of comfort and immersion." It's also a universal kit that should work with any flat-panel monitor under 27 inches. That means bigger monitors need not apply, unfortunately.

The kit is not cheap, either—it's now available on Amazon for $109. On the plus side, the kit comes with two assemblies, so you don't have to purchase a second one for a triple monitor setup.