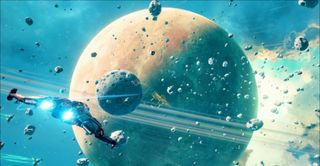 Begun the Auto Chess wars have. Valve is developing its own version of the Dota 2 mod. The Dota 2 modders are making a different version called Auto Chess for the Epic Games Store, and Riot have jumped in with their own accessible take on the mode. Which one should you play? This week Jon Bolding considered the options.

That's not the only conflict we've seen this week. There can sometimes be a lull between E3 and Gamescom, but not this year. Here are the biggest stories of the week.

We love a good EVE story, and Steven loves writing them.

Sometimes it's fine for a sale to just be a sale rather than a convoluted social experiment. Plus, indie devs have seen a bigger than usual spike in players removing their games from wishlists, which might have been due to users misunderstanding the contest rules.

Valve shows no signs of changing the cut it takes from games sold on Steam and the exclusivity policy is surely unsustainable in the long term. Epic has made a big bid to turn the viral success of Fortnite into long-term success in digital retail. How much of the market can Epic capture?

• Bernie Sanders is about to become a Twitch streamer

Who's your Apex Legends main, Bernie?

• Oh my god Mount & Blade: Bannerlord is in closed beta

This suggests the game might actually come out one day.

• Final Fantasy 14 and Masters of Doom are getting TV series

Who would you cast as Carmack and Romero?

"We failed to control scope" said Mike Morhaime, in an interesting interview about the company's internal agony over the cancellation of its massive new action MMO.

Quiz of the week

I love Destiny lore, and the strange names Bungie comes up with for the game's exotics. However chatting in the office we noticed a crossover with the world of craft beer and at that point a quiz was inevitable. Yes the 'both' option is cruel and no we're not sorry.

Worst of the week

Sometimes games are bad and it's our job to say they are bad. I'm sure there are plenty of much poorer games out there we haven't encountered yet, but these 22 games felt particularly grim to work through.

Woman Disappointed Her Date Doesn’t Look Anything Like His Cutsceneshttps://t.co/IcT8akTqdxJune 25, 2019

Relevant to this tweet: Wes' piece, 'Why the hell do they have mouths,' a Final Fantasy 7 retrospective.

We also like this thread summarising the way different games frame saving your progress.

The UK team has been consumed by the release of Neon Genesis Evangelion on Netflix, which most of us have never seen. The sad-people-in-mechs show has generated a lot more chat than expected, and it's felt like a bit of a cultural moment, on Twitter at least. Where are our sad-people-in-mechs games?

More importantly this week, old grudges have been reignited.

Haven't had the time to play the Hitman 2 bank level yet, but I'm excited about the fact that since it's DLC and it's months after release, there's a far lower chance of @Octaeder knocking me off the leaderboard.June 26, 2019

Also, twist! We all turned into esports champs under Chris' highly moral guidance.

I also hired an 'esports private investigator' to spy on other teams. I'm ethical as hell https://t.co/uEohwJM232June 21, 2019

That's all for this week. May your your quicksave key never fail.