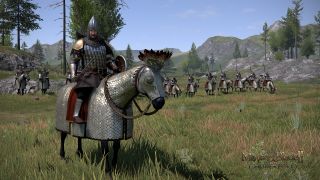 This week, Taleworlds started letting players into Mount & Blade 2: Bannerlord for the long-awaited sandbox's first closed beta. It's a multiplayer beta, so players won't be mucking around in the campaign; instead they'll be skirmishing with each other and testing the game's matchmaking and combat systems.

While the studio remains tight-lipped when it comes to a release date, it does seem like Bannerlord's approaching the last leg on its journey through development, and once this closed beta concludes, Taleworlds will start letting everyone test the multiplayer. But for now, it's being kept small.

"With this being the early stages of testing, we have decided to keep the player count rather small and manageable," wrote Taleworlds, "allowing us to more directly engage testers and make better use of the feedback provided to refine Bannerlord’s multiplayer and make it the best that it can be. The game is far from feature and content complete, and these early tests are very much focused on testing the game’s systems and mechanics, as well as, stability before it’s ready for a more general audience."

It's been seven years since Bannerlord was first announced, so this sort of progress is pretty exciting. Taleworlds is calling this the first steps to releasing the game. I predicted a 2019 launch earlier in the year, and I still reckon there's a chance. At Gamescom, people outside of the closed beta will get their first opportunity to play, so that could coincide with the open beta.