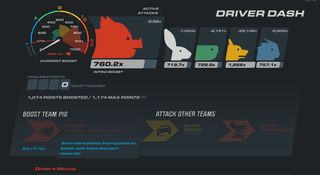 The Steam Summer Sale Grand Prix game is confusing the hell out of everyone, and in more ways than we initially understood. Not only is the game itself a boggler, but a number of indie developers are complaining today that their games are being deleted from Steam wishlists in large numbers. Some are speculating that this is because users have misunderstood the contest and are trying to maximize the possibility of winning specific games on their lists.

The signup page for the Steam Grand Prix game says that randomly selected users from the top three teams will be given their "most wished for" game on their wishlist each day. Further down in the small print, that's clarified to be the game the user has ranked highest on their wishlist. The theory among some developers is that lots of people aren't reading that far down, and aren't taking chances. Instead, they're assuming that any game on their list could be picked, and are jumping in to cut games they're less interested in, or that simply cost the least.

Thanks to the Steam summer sale minigame, where can win a free game from your Steam wishlist, @WildfireGame wishlist deletions have skyrocketedPeople want to narrow the pool to more expensive games.Wildfire isn't out. You can't win it as an unreleased game. This is madness. pic.twitter.com/kon3ZPl96XJune 27, 2019

Oof, in Steam's summer sale, they're offering users a chance to win their 'most wished for games'. Lots of users have misinterpreted as 'any game on my wishlist', instead of 'the top game', and are deleting lower priced indie games to make sure they get pricey AAA games instead. pic.twitter.com/xo4Z7cpUgzJune 27, 2019

This Reddit thread, started by a Steam user who won a copy of Cyberpunk 2077, illustrates the confusion, as commenters ask questions about how much was spent prior to winning the game, what they bought, and how many games were on the wishlist—all suggesting confusion about how the contest works.

A 2018 Gamasutra post by Jake Birkett of Grey Alien Games explains why wishlisting is so important for indie developers. It's all based on a relatively small sampling of games, but his bottom-line conclusion is that each wishlist entry is worth approximately 0.5 sales. In other words, wishlists aren't just fire-and-forget fantasies, they have a significant effect on launch week sales. They also help games get more promotion on the store.

This is heartbreaking. Wishlists play a huge part in potential store placement once you finally launch. We've put so much work into being so open and transparent with development to build that wishlist over years and it's melting away in a graph, for a saleJune 27, 2019

Interestingly, Birkett said on Twitter that he doesn't think the "wishlist apocalypse" is a serious issue, although he suggests in a followup that it's all out of his hands anyway, so he just does his best not to worry about it.

Paul Kilduff-Taylor of Mode 7 Games, who tweeted about experiencing high levels of wishlist deletions, told us in an email that this was "the highest number of [wishlist] deletions in a single day" but added that it's "not completely unprecedented," and that similar (but smaller) deletion spikes have occurred in previous years.

"It's genuinely difficult to tell—people do purge their wishlists at times when they get notifications, such as during sales or game releases," he explained. "You could argue that the deletions don't count as 'lost sales' because that person was never really going to buy the game in the first place—sometimes people Wishlist the first time they see a game, then change their minds later on when it becomes clear that it's something they're going to want to buy."

Winter Wolves Games said something similar, but also noted that while deletions generally spike at the beginning of big Steam sales, "the problem is that others reported the delete spike is MUCH higher than purchases this year." Sam Coster of Crashlands studio Butterscotch Shenanigans reported the same:

Ours looks like Mike's. There's always a spike in deletes with sales events, but not to the scale of this time around.June 27, 2019

Regardless of the effect of the Grand Prix game on wishlists and sales—and that discussion is still very much underway—there's clearly a problem when this much confusion runs this quickly through so many members of Steam's development community. Ideally, the second day of one of the industry's biggest sales shouldn't leave small developers trying to figure out how much damage it could be doing to their business.

I've reached out to Valve for comment and will update if I receive a reply. In the meantime, remember that you don't need to hack up your Steam wishlist—just move the one you really want to the top and you'll be all set.

Update: In a Steam blog post that went live right after this story, Valve clarified how free games are awarded in the Grand Prix game by confirming that if you're drawn as a winner, you'll be given the top item on your wishlist.

"Just move your favorite item to the top of your wishlist and you should be good to go," Valve wrote. "There's no need to remove other items from your wishlist—keep them there so you'll be notified when those items release or go on sale."

📣 PSA! 📣 You don't need to remove games from your Steam wishlist in order to win your Top Wishlisted Game during the Steam Summer Sale - just move your favorite game to the top of your wishlist and you're good to go!☀ 2019 Steam Summer Sale: https://t.co/4TuWeBVo1O pic.twitter.com/hNrMnTSzcYJune 27, 2019

The update doesn't address any specific developer complaints, but that clarification does appear to acknowledge that the process has confused some users. The wording at the top of the Steam Grand Prix signup page is currently unchanged, however.

Valve has also made some changes to the Steam Grand Prix game rules that it said should make it more balanced and "fun to play." (And hopefully less confusing, too.)