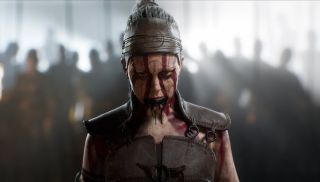 The Game Awards are always part awards show, part trailer showcase, but this year's ceremony went all in: there were nearly two dozen trailers and announcements during the event, and that's only counting the stuff that has something to do with PC gaming. We collected all of the relevant Game Awards trailers and announcements here. Below are a few highlights, as well as some PC gaming news that didn't come out of the Geoff Keighley show.

The Wolf Among Us 2 is happening

One of my favorite Telltale games is getting a sequel, even after Telltale was gutted earlier this year. The second chapter in Bigby's story is being made by Telltale—also known as LCG Entertainment, which purchased the studio's assets in August—in collaboration with AdHoc, a studio founded by former Telltalers. The original Wolf Among Us series is free on Epic right now, too. (It's good!)

We were wondering what was going on with Gears Tactics after it skipped E3, but it's alive and well, and we learned at The Game Awards that it's coming next spring. The new trailer is pretty cool, too—if the modern XCOM series is up your alley, check it out.

Magic: Legends is an MMO set in the Magic: The Gathering universe

We knew that Cryptic Studios (Neverwinter, Star Trek Online, and City of Heroes) was working on a Magic MMO, but that was all we knew. Now we have a name, a cinematic trailer (below), and the opportunity to sign up for the beta. It's something!

The new Xbox, which is coming next winter, looks a lot like a small PC tower. What's news for us is that all 15 of Microsoft's studios are working on exclusives, and those exclusives are likely to come to Windows 10, as has been Microsoft's policy of late. The first to be announced is Senua's Saga: Hellblade 2.

The Witcher's final, epic trailer sees Ciri on the run from a Nilfgaard creepo

We're just a week away from season one of Netflix's Witcher series—all eight episodes will be dropped at once, as is the Netflix way—and so we've been given one final trailer.

BioShock is returning, but it's still several years away

Unsurprisingly, one of 2K's most popular series is getting a new game. We were pretty sure this was happening already, but it's official now, with new studio Cloud Chamber heading up development in BioShock's post-Ken Levine era.

Baby Yoda is now in The Sims 4

You cannot escape the small green ear beast. Gaze upon him:

On the cusp of the '20s, we've been looking back at the 2010s in PC gaming. It was quite the decade: our hobby went from accusations of being 'dead' to widely being recognized as the most exciting, vibrant, and diverse gaming platform there is. At least, that's how we recognize it.

Wes put together a group effort to catalog the 69 biggest, weirdest moments of the decade in PC gaming. James did some internet archaeology to nail down what it was like to be a PC gamer in 2009 (lots of Bawls and low-res displays). Chris examined how battle royale changed the last decade of games. Fraser pointed out the success of turn-based tactics games over the past 10 years. And finally, I took a look at what people back in 2010 thought gaming would be like today—no surprise, they were mostly wrong.

In the coming weeks, we'll continue to look back on the past decade, as well as ahead to the '20s. Also on the way are our 2019 Game of the Year Awards. We're awarding games in several categories, but only one game will receive our final GOTY award of the decade. Look forward to agreeing completely with our flawless taste. (That's what happens every year, right?)

That's all for this week. If you still need to do any holiday shopping, check out our gift guide. And if you know what to get a 13-year-old, please tell me. Browsing Fortnite merch gives me dry skin.