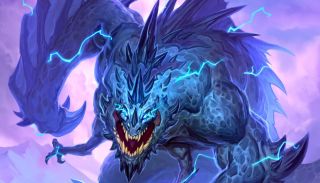 Hearthstone: Descent of Dragons only launched a few days ago, but Blizzard is already working on a balance update that will tweak some of the new cards and make changes to the Shaman, which has lately become ridiculously powerful.

The third and final set of the year was already judged as pretty overpowered before the update was live, and since it's been out in the wild it has transformed Shamans into unstoppable, storm-summoning forces of nature.

The Galakrond Shaman deck has some uniquely powerful cards and abilities, like its Invoke being used to summon Rush minions. Then there's the Corrupt Elementalist, which lets you use Invoke twice, something that's very handy on its own but even more so when followed by Dragon's Pack and Galakrond, The Tempest. These cards let you summon 2/3 Spirit Wolves with Taunt and 2/2 Storms with Rush, respectively, but using Invoke twice upgrades them.

Since appearing a few days ago, the deck has of course become incredibly popular, except for anyone having to fight it. Calls for nerfs are to be expected with any update, but Blizzard appears to be acknowledging that, in this case, there's definitely something wrong.

The changes will arrive within the next week, though it's not clear how the Galakrond Shaman deck will be affected. Cards changed by the update will be given Arcade Dust refunds.