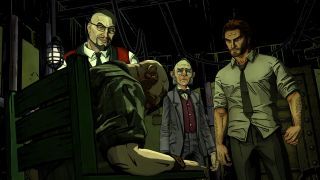 The Wolf Among Us is a fan-favorite Telltale adventure, originally released in five parts over 2013-14. A sequel—or "second season," in Telltale terminology—was in the works but ran aground, along with the studio as a whole, last year. At The Game Awards last night, though, it was brought back from the dead, and coincidentally or not (and I'm pretty sure it's not), the original is now free on the Epic Games Store.

The Wolf Among Us joins The Escapists, which was announced yesterday as the usual Epic weekly freebie. The Epic edition includes all five episodes of the first season, in which Bigby Wolf, the sheriff of Fabletown and former Big Bad Wolf, investigates a murder in the hidden community of fairy tale characters in the mid-1980s. It spins off from there, but like other Telltale games, details and outcomes depend largely on the choices players make over the course of the game.

If you like the Telltale thing, this is a good one: We called it "a fantastic, morally ambiguous detective tale" in our 83/100 review. Not all choices were as meaningful as they could have been, but despite that Tyler wrote that "The Wolf Among Us still feel like something I lived more than something I watched." And if you're just curious, hey, it's free.

The Wolf Among Us will be free until December 19, the same as The Escapists. Epic also announced today that it will finish the year by giving away 12 games, one per day, beginning December 19.