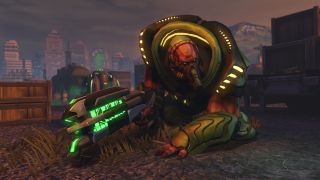 There have been few moments over the last decade where I've been far from a grid full of little soldiers duking it out turn by turn. There was a lull, certainly in attention, after the '90s, but then XCOM: Enemy Unknown came along and lit a fire under the genre, arguably kicking off the decade of turn-based tactics games, which I never would have imagined saying at the start.

I say 'arguably' not because there is any doubt that this has been a fantastic decade full of smart, tactical battles, but because the extremely slick Frozen Synapse came out in 2011, a year before XCOM, and was just as impressive. It didn't quite have the same impact, however. XCOM is a reimagining of a series that was already acclaimed, but with a more cinematic and character-driven bent. Squads are also smaller, but more customisable, making the loss of any of them devastating—a trend that's largely been continued.

XCOM has even changed the way we talk about games. If you want to describe the broad strokes of a turn-based tactics game now, you can just say it's "like XCOM" and people will probably know what you're talking about. That's not to say there haven't been games to follow in its wake that defy that definition, and those that do still find ways to set themselves apart.

Its influence still looms large, but the genre might have floundered again if everyone was just chasing Firaxis' remake. Instead, the flexibility of tactics games has led to things like Invisible, Inc., where soldiers and aliens are replaced by cyberpunk spies and hackers. It's a stealthy roguelike affair where you want to avoid killing. The random maps are high-tech puzzles full of alarms, doors and turrets waiting to be hacked, with danger increasing with each turn. A simple slip-up can cause the most methodical of infiltrations to go awry, leading to a heart-thumping—but still turn-based—chase.

Combat and action still dominate, but that leaves room for games as dramatically different as Age of Wonders: Planetfall and Wargroove. One is a sci-fi 4X game with tactical battles, while the other is pure tactics game inspired by Advance Wars. They are universes apart, even if they share a few fundamentals. Triumph Studios had to take a gamble when it revived the Age of Wonders series with Age of Wonders 3, publishing the game itself, but it paid off, paving the way for expansions and the sequel. Wargroove's story is similar, with Chucklefish noticing the gap left by a classic game and creating something to fill it. Even now, big publishers generally don't seem interested in these games, leaving it up to single-minded devs and 'indie' publishers to drive the genre.

What you do outside of the tactical battles has grown in importance, with campaigns full of construction and unit management that take up almost as much time as the fights themselves. All these elements have been around since the '90s, but modern tactics games have really leaned into them, and none more so than BattleTech.

I'm on a big BattleTech kick at the moment and if I ever want to see the campaign through I'm going to have to make it my life. The galaxy-scale sandbox gives you a ship, a crew and a bewildering number of directions. Every new system is another opportunity to find more weapons and modules for my mechs, along with parts that can be used to construct even more of them, so I'm endlessly tweaking and building. And once my shopping is done, there's always a big list of contracts, branching scenarios and story missions to undertake. It's really a nightmare for me: a turn-based tactics game I can just keep playing.

While I live for this stuff, it doesn't matter if the turn-based battles are rubbish. Into the Breach, our 2018 Game of the Year, was a reminder of what really makes these games so compelling. There's still a campaign and character progression, but you're only ever a few minutes away from another brisk, engaging brawl. You get three mechs, a few abilities and a handful of enemies you can quickly familiarise yourself with. It's straightforward, but don't think for a second that makes it any less capable of conjuring up some bastard-hard tactical puzzles. It's elegant, precise and uses its small bag of ingredients so well that you'll be frequently stumped, but also overjoyed when you finally figure out how to squash the alien bugs.

Like the best mechs and XCOM agents, the turn-based tactics genre is reliable. Sure, that's not as sexy as battle royales and MOBAs doing dizzying numbers and causing mass hysteria, and yeah, maybe it sounds a bit like I'm describing a truck, but it's probably going to outlast a lot of trends from this decade. That's because it's not a trend—it's a genre that's once again found its footing.