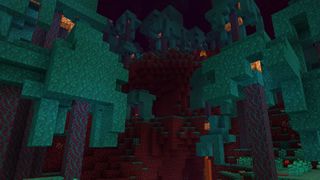 What's all the fuss about Netherite in Minecraft? Netherite is a new high-level material found in the Nether prized for its Diamond-beating properties. It's all the rage in the Minecraft 1.16 snapshot, and for good reason: it's incredibly powerful.

Thought you need never take a break from mining Diamond? Well, never say Nether. I'm here to give you all the tips you need to get your hands on Minecraft Netherite, including how to craft the new ore and why it's the perfect material for just about anything. Now, let's plan our journey into the Nether and brush up on our crafting skills.

Where to find Minecraft Netherite ore

Before you set out on your quest for the precious material, here's what you're going to need:

Note: Netherite can be crafted using a regular furnace, but using a Minecraft Blast Furnace will speed up the process considerably.

Despite its impressive value, Netherite is surprisingly easy to craft—once you make your way into the eerie alternate dimension of the Nether. Access the Nether by crafting a Nether portal in the Overworld with a rectangular obsidian frame activated by fire inside it.

It's in the Nether you'll find Ancient Debris, deep in the belly of this creepy, dark dimension. This block cannot be blown up so you'll want to bring your trusty Diamond Pickaxe to hack away at it.

Now, to craft Netherite, here are the ingredients you need:

In need of a blast and lava-proof house? Combine nine Netherite Ingots to create a Netherite block for the safest crib around.

Diamond has been the go-to material for tools and armor for some time, but Netherite has stolen the show. Netherite items float in lava and don't burn—sounds pretty good, right? It's about time you got an upgrade—here are all the items that can be crafted using Netherite:

Donning Netherite armour gives you a more durable ensemble and has knockback resistance for added protection against arrows. Of course, colour coordination between your armour and weapons is just as important, too. Thankfully Netherite weapons deal more damage than Diamond ones. That said, if you're more of a farmer than a fighter, Netherite tools are more durable and mine materials faster than their Diamond counterparts.

However, Netherite doesn't finish top of the class in every way. While Netherite items have a higher enchantment value than Diamond, it's still lower than Gold. That said, considering Netherite's durability, knockback resistance, and style, it's an acceptable compromise. It's still perfectly worthwhile heading over to your Minecraft enchantments table and casting the desired enchantments on your Netherite items. Just remember that you'll need a stash of Lapis Lazuli to fuel your spells.