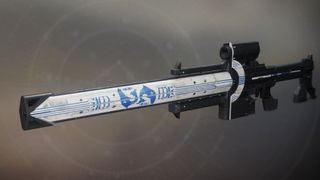 If Se7en has taught you one thing, it’s not to ask what’s in the Mysterious Box, but that’s exactly what we are going to do in this guide to get Izanagi’s Burden. With the launch of the Black Armory came the forges and within the forges there were three exotic weapons; Jotun, Le Monaqrque, and Izanagi’s Burden. The first two can be found through random drops when completing different Lost Forges, but Izanagi’s Burden is going to take a little more than simply participating in the events.

For quite a while during Season of the Undying a bug meant that acquiring Izanagi's Burden was impossible. The issue related to a particular Forge activity, the completion of which is essential in picking up the supremely effective exotic sniper rifle. As of November 7, 2019, a hotfix now means that Forge keys count towards the Mysterious Box as they should.

The first step in getting Izanagi’s Burden is to find the box in which it resides, the Mysterious Box. You’ll find the box hidden just outside of the Volundr Forge in the European Dead Zone, within a cave on the cliff’s edge on the left side prior to jumping across the broken bridge.

Locating the keys to open the Mysterious Box

After you acquire the box, you’ll need to find four different keys to open it. The Fishhook, Butterfly, Hand, and Black Armory keys are all found throughout the Volundr, Izanami, and Gofannon forges—respectively—with the fourth, Black Armory, requiring additional work.

While in these forges, you’ll want to keep an eye out between the first in the second round for a series of small drones flying around the arena. If you destroy all the drones within the arena, you’ll be notified that you have tempered the forge and received a Maximum Temper buff. Successfully completing the forge you’ll receive the keys after tempering.

The three locations for the forges can be found below in gifs.

Similar to the keys above, the Black Armory key can be found within the Bergusia forge after you destroy the drones to receive the Maximum Temper buff, but to get this part takes a few more steps than previous keys.

The first step is to visit Ada-1 in the Tower and you’ll receive the Black Armory Key Mold and that you need to kill watchers in the underbelly of the Leviathan raid. There’s two ways to do this, as a team while completing the Leviathan raid normally or to use the switches beneath Leviathan to gain access to the Underbelly solo.

This most simple and fastest approach is to do this is the second method. You’ll need to load in to the Leviathan and make your way to the switch room in the basement. Pull the switches in the following order; 1, 5, 3, 2, 4, 6 as shown in the GIF below.

After you’ve successfully opened the door via the switches, you should make your way towards the engine room to kill the watchers (follow the path in the gif below). While in this room, you will want to kill all the Watchers and additional enemies, exit the room, pull the switch again, and repeat until you’ve killed enough Watchers, which is 24, to fulfil the requirements of the quest by harvesting their Lenses.

Next, you’ll need to gather 200 Glimmering Amethyst, this can be done through opening planetary chests, completing strikes, and participating in Public Events. The fastest method is to complete Heroic Public Events, which nets you 10 per completion. Normally this should take you 20 events, but equipping a ghost with a chest finder for the planet you are on will speed up the process as you’ll stumble upon multiple planetary chests naturally while waiting for events.

You’ll now be able to find the final key within the Bergusia forge by taking part in the event, find the drones, and destroying them. The drones are found circling two pillars on each side of the arena (as seen in the gif below). Completing the forge, just like the others, will net you the final key to the Mysterious Box—but we are done, not yet.

If you haven’t already, you can now place all four keys in to the Mysterious Box. In doing so, you’ll receive a Mysterious Decryption Device and a Mysterious Datapad. Take these items to Ada-1 in the tower and you will receive the next step of the quest.

This part of the quest requires you to complete and hand in a rare Black Armory bounty. Black Armory bounties are randomly dropped when completing standard bounties from Ada-1. So, you’ll either need to keep one on you and wait to turn it in, or you’ll need to grind out Ada’s bounties until you receive one.

When you turn in the bounty, you will receive an Obsidian Crystal. The next step requires you to complete the Shattered Throne, which is a 3-weekly event in the Dreaming City when the curse is at its highest.

After that, you need to complete a special instance of the Pyramidion. This version will have its own unique modifiers which increases the damage of solar weapons and the frequency of heavy ammo. You’ll need to be a minimum of 650 Power Level to attempt this strike and you won’t be able to change your gear while attempting to finish it. So, equip a solar class, your favourite solar secondary, and a solar heavy weapon that packs a punch.

Upon completion, you’ll receive the Unidentified Radiant Frame and gain access to the Lock and Key mission on the EDZ. It’s quick, easy, and when you reach the end you’ll get an Exotic item called Not a Weapon that you can take to Ada-1 in exchange for Izanai’s Burden.