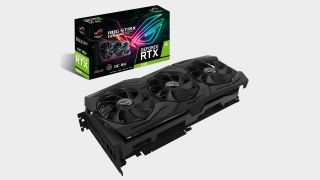 Upgrading your graphics to the best GPU available can be cheaper than you think if you keep an eye out for the best Nvidia RTX 2080 deals. Offers on the 2080 line have been few and far between this year, but Black Friday is around the corner and we are expecting it to be a banner year for holiday sales on graphics cards. All told, this month should be a great time to get one of the best graphics cards, including a 2080.

So far, getting a deal on a 2080 hasn’t been easy. The top of the line cards are in such high demand that paying the standard price is good enough, assuming you can afford it. Prices on the 2080 Super and 2080 Ti are trending up, so the standard price is generally as good as you’re going to get. The first-gen 2080’s value is in decline, though, and there we’re starting to find deals that reflect it. $650-700 is a lot, but it’s not a bad price for a high-end card that brings Ray Tracing support and other high-end features to your PC.

We'd recommend the Super card because it's the better version of the basic 2080, although if you can find a decent deal on a regular 2080 you're unlikely to be disappointed and you will still have one of the top of the range GPUs in your PC. So, here are the best current prices on the regular 2080.

If you're looking for something more powerful, the top-of-the-line GeForce RTX 2080 Ti is a monster of a card—with a big old price tag to match, but if you go for it and have that budget available to you then embrace the power! While these were always above $1000 for the longest time, we have started to see the card dip lower, so they're becoming semi-affordable. Here are all your current options:

Another way to get in the action is to buy a pre-built gaming PC. Alienware, Avadirect, CyberPowerPC, Digital Storm, Falcon-Northwest, iBuyPower, Maingear, Origin PC, and Xidax all have GeForce RTX 2080 and RTX 2080 Ti options. It's really up to you what spec you decide to go for here, but if you're putting a 2080 in there, you'll need the other components to make the most of it. That means a newer CPU from either Intel or AMD, at least 16GB of RAM (we'd recommend 32GB) and an M.2 SSD to make sure load times aren't slowing you down.