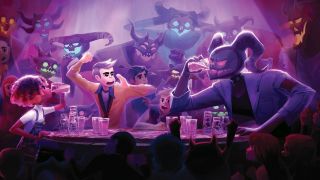 It’s been three years since Night School Studio released its bewitching coming-of-age debut Oxenfree. Its next game, Afterparty, looks even stranger and more surreal. We meet Lola and Milo, two recently deceased best friends who wind up in Hell. Their only chance of escape? Beating the Devil and his horde of demons in a drinking contest.

Yes, you read that right. Satan has a taste for booze and demons like to party just as much as teenagers do. It sounds like Disneyland for burnouts, where lurid cocktails replace rainbows and monsters prowl the streets instead of cute animals. Fitting considering the inspiration that had been brewing for a number of months before development began.

“The core concept came from a series of conversations that Adam [Afterparty and Oxenfree writer] and I had while walking around a massive cemetery across the street from our office,” says Sean Krankel, co-founder of Night School Studio. “It’s where Michael Jackson, Walt Disney, Carrie Fisher, and Lucille Ball are buried, and we used to wander around the grounds to get our creative gears going. Weird, I know.”

At first Krankel and his team wanted to make a game about being in a bar “because bars in games and real life are pretty rad”. But they began to wonder, would you play as a bartender or a drinker? Well, of course a drinker. And would it take place in one bar or many? It had to be a pub crawl. And would you be trying to outdrink anyone? Who would be the craziest person to topple? In the graveyard it hit the two friends—Satan!

Yet Night School’s depiction of Hell is far from the traditional ones we’ve seen in art and literature, where a labyrinth of flames promises endless suffering for its eternal guests. Here it’s a modern cityscape of winding streets and grotty bars, brought to life in pops of romantic neon like the colours you find in bottles of strawberry liqueur and crystallised violets.

“We knew fairly early that we wanted to move past everyone’s stereotypical vision of Hell,” says Krankel. “We wanted to draw from a wider variety of cultural and geographical reference points, to create a new, nightlife-fuelled, hybrid underworld. So if an artist or writer wanted to have a district inspired by Shibuya, or another with cobblestone streets and cute pubs, let’s make room for it! We’re creating [our] own version of Hell, one that we can think of as distinctly Night School.”

One for the road

While the characters and dialogue options are very similar to Oxenfree, there are so many new features for you to look forward to. For example, every bar you visit in Hell sells a variety of drinks, and every drink unlocks new dialogue trees. Want to be flirty? Aggressive? Sloppy, funny? Afterparty’s bars are littered with options. While you’re at it you can play beer pong, dance, and take part in drinking minigames with the assorted demons you meet.

Yet the story still feels cut from the same cloth as Oxenfree. What is it about young people that resonate so strongly with Night School?

“Our games are inhabited by people who are hopefully very relatable, but dealing with circumstances that are wholly unfamiliar,” explains Krankel. “Being a teenager or in your early 20s is a magical, messy moment because huge pieces of your core personality are formed, yet so much of who you yearn to grow into is a mystery. So as you hack through all that stuff, you do it with friends. It’s a hazy, perfect window of time where love, trust, and personal goals are still malleable, and it makes for a great canvas for interactive stories.”