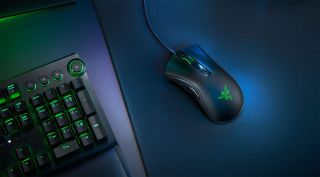 Razer might be building LED toasters these days, but its bread and butter is still the gaming mouse, of which the DeathAdder is one of the best around. It's also gone through multiple iterations. The latest model, the DeathAdder V2, figures to be the best one yet.

That's to say, it appears Razer has taken a few steps forward with the newest version of the DeathAdder, rather than one (or more) steps back. We have not tested it yet, though our friends at Toms Hardware have and came away impressed. So, what makes this one different from past versions?

The biggest upgrade is the sensor. Razer took the same Focus+ 20K dpi optical sensor it introduced with its ambidextrous Viper Ultimate (also an excellent rodent) and injected it into the DeathAdder V2, which is ergonomically designed for right-handed gamers. For reference, the now-second fastest DeathAdder is the Elite model, with a 5G 16K dpi optical sensor.

Any talk of high-speed sensors inevitably elicits comments about how sensitive a gaming mouse truly needs to be. There is a contingent of gamers who feel that anything over a few thousand dpi is overkill, including some professional players. Fair enough. At the same time, I've never automatically dismissed a mouse for having a high max sensitivity rating (you don't have to max it out, after all).

When Samuel reviewed the Viper Ultimate, he noted it "tracked well on a variety of surfaces" and that his movements, no matter how quickly they were, "felt consistently sharp." Given that the DeathAdder V2 is using the same sensor, it's reasonable to expect similar performance from it, though nobody here at PC Gamer has reviewed this model yet. The verdict is still out.

The upgraded sensor brings with it some other capabilities as well, including Smart Tracking and Asymmetric Cut-off and Motion Sync features. What those refer to are the rodent's ability to automatically calibrate itself to different surfaces, set a landing distance for more precise control, and sync the signals the mouse sends out to your PC for more consistent tracking, as Razer details on its Focus+ sensor page.

The DeathAdder V2 is also lighter than previous versions. It weighs 82 grams, compared to 105 grams for the DeathAdder Elite. So, it's around 25 percent lighter, while retaining the same overall shape and size. And there is an additional programmable button for a total of eight instead of seven.

For anyone interested, the DeathAdder V2 is available now for $69.99.

Razer also upgraded its Basilisk mouse in similar fashion with a new V2 model. It gets the same sensor upgrade, three more programmable buttons for a total of 11, and a lighter profile (92 grams versus 107 grams).

Like the DeathAdder V2, the Basilisk V2 is ergonomically designed for right-handed users.

The Basilisk V2 is available now for $79.99, while the previous generation model has been slashed to $39.99.