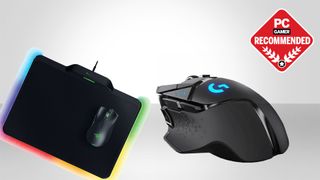 Get a leg up in the rat race with our picks for the best wireless gaming mouse. (Image credit: Razer, Logitech)

Until very recently, the best wireless gaming mouse wouldn’t work as well as its wired counterpart. Issues with connectivity, battery life, and price all made the idea of getting a wireless mouse feel impractical. In the last couple of years, though, things have changed. Though wireless mice are still considerably more expensive than their tethered counterparts, the technologies around them have reached a point of parity, so going wireless is now a luxury, no strings attached.

As with our picks for the best gaming mice, the best wireless mice define themselves by their comfortable shapes and accurate sensors, as well as well-placed, customizable inputs.

These days, most mice also require a configuration app to change settings and create custom profiles, and each manufacturer makes their own. The software often goes overlooked, but going with a brand like Razer, Corsair, or Logitech—which all make good software—can be the difference between a so-so experience and a great one.

When you go wireless, there are a few other components: Connectivity is vital, as is battery life. At the tippy-top of the heap, you can find mice with wireless charging, which makes the mouse truly wire-free, though that’s a luxury and often costs more than it's worth right now.

If you’re looking to live that wireless life, check out our list of the best wireless gaming keyboards, as well. If you’re anything like me, your desk is cluttered enough as it is.

Ousting the versatile G903, the G502 Lightspeed Wireless is the latest iteration of a long-standing favorite for Logitech veterans, the G502 Proteus Spectrum. It has gone through a bit of an evolution rather than revolution over the years. Initially being upgraded with a 16K DPI sensor, Logitech took the next logical step by pairing this beast of a gaming mouse with its PowerPlay technology, allowing it to remain charged continuously and connected. Even without the PowerPlay mat, the G502 can remain functional for more than 40 hours on a single charge.

Not a single feature was removed to make room for this convenience. Everything that made the original G502 great is present here, from its adjustable 16g weights to its unlocked mouse wheel and 11 buttons. While its aggressive batmobile aesthetic may not appeal to everyone, the performance of this mouse is second to none.

While the G903 remains an excellent alternative, especially for southpaw shooters, the added customizability and macros let the G502 inch ahead of the competition, but just barely.

The wireless version of this venerable warhorse is the spitting image of its ancestors and the pinnacle of uncompromising performance when it comes to wireless gaming mice.

The best wireless mouse with a charging dock

The Basilisk Ultimate takes full advantage of Razer's HyperSpeed wireless tech by making it one of the fastest gaming mice out there. The comfortable right-handed mouse sports a total of eleven button inputs, 20K Focus+ sensor, and 14 zones of custom RGB lighting that uses Razer's Synapse software (which can often be hit-or-miss). Other than that, it's a fast wireless mouse that fits well into your hand with over 100 hours of battery life (with RGB lightning off).

Billed as mostly an FPS gaming mouse, playing games like Apex Legends and Halo: Reach played pretty well especially when handing precisions weapons like the Wingman or Battle Rifle. The paddle on the mouse makes changing your DPI on the fly super easy. As someone who still plays Starcraft 2, I was able to micro-manage my Zerg brood with relative ease as my 'lings tore some poor Space Marines.

One of our favorite things about the Basilisk is the conveniently sized charging dock that doesn't take up much space on your desk, though we do wish it did wirelessly charging like the Firefly V2.

The Logitech G502 above has a peerless design, but it isn't affordable for everyone. With the newer G305, Logitech tried to make a high-performance wireless gaming mouse for everyone. At a mid-range price, it's competing directly against some high wired mice, but there are no real compromises here in terms of performance or design.

The G305 uses Logitech's newest Hero sensor, an iteration on the fantastic performing sensor in the G502. It can last more than 200 hours on a single AA battery (which helps keep the cost down vs. being rechargeable). The small wireless dongle can be stored inside the body of the mouse, but critically, the left- and right-click buttons are separate pieces from the removable palm rest, ensuring a reliable and satisfying click.

The shape of the G305 is based on a small, ambidextrous design Logitech has been using for years, and they haven't messed with a good thing. While components like the scroll wheel and buttons don't feel quite as premium as the ones in the G903, they're still far better than anything you'll find in a cheap gaming mouse. The quality and performance of the G305 are killers for the price.

Read more about it here.

It’s incredible what twenty dollars can get you. Budget gaming brand E-Blue makes a variety of wired and wireless gaming mice, and the Mazer II is a decent wireless mouse for about 20 bucks. Still, I wouldn't recommend anyone in the market for a mouse go this cheap: you'll get a much better sensor with a wired mouse for just a bit more money, and much better performance, battery life, and software with a high-end wireless mouse like the Logitech G502. But if you're dead set on wireless and only have a few dollars to spend, Mazer II is the right choice.

The Mazer II has four DPI options, from 500 to 2500, and a comfortable enough left-hand grip (even if the materials are on the cheaper side). Don't expect any driver software with the Mazer II, or the kind of performance you can get out of typical gaming mice, which have polling rates of 1000 Hz, meaning they communicate with your PC every millisecond. The Mazer II only offers a 250 Hz polling rate. Now, will you ever notice that difference? That depends on how sensitive you are to the responsiveness of your mouse cursor. For most people, those few milliseconds won't offer a noticeable delay.

While I didn't have any wireless performance issues with the Mazer II, don't expect its signal to be as strong as what you get with a Logitech or Razer mouse. In a "noisy" wireless environment, you could end up experiencing some interference. That's why it's cheap.

The best wireless mouse with the longest battery life

The Logitech G604 Lightspeed has only recently become one of our favorite gaming mice of the year. Its insanely long battery makes it the perfect mouse for gaming on the go. Logitech boasts that the G604 can last over 200 hours in a single AA battery through some sorcery.

While less flashy than your typical gaming mouse, it still has everything you need a PC gamer needs. For starters, the six reprogrammable buttons along the comfy thumb-rest make the G604 a great for who religious remap their controls. If you play a lot of MOBAs or MMOs, the Logitech G604 might be the mouse for you.

The best productivity mouse is also suitable for most games

The MX Vertical is one of the best and most comfortable mice I've ever gotten my hands on; it's only this far down the list because it's not designed to be a dedicated gaming mouse. With a high resolution 4,000 CPI, it's undoubtedly sensitive enough to be used in most gaming applications, particularly strategy games or sims where fast movements or insane precision aren't required. Still, it does lag behind the 12,000 or 16,000 CPI sensors you find in a lot of modern gaming mice.

The MX Vertical's strength is its ergonomic design, molded to allow you to rest your hand in a neutral position. After weeks of use, the lingering aches (and crackling joints) in my right hand had subsided significantly, and it's become my primary mouse at work. Even playing a few rounds of Apex Legends, I found the MX Vertical perfectly competent, though I'm sure eSports pros would disdain it for serious competition. But for productivity and most gaming scenarios, the Vertical is an excellent pointer, one of the best money can buy, and generally available right around the $80 mark, a bargain at that price.

How we test wireless gaming mice

We used each wireless gaming mouse for several days, at minimum, getting a sense of how the mouse felt in my hand, the grip and material, and the feel of its buttons. We paid attention to battery life and how often the mouse needed to be recharged if it was rechargeable.

For gaming, we primarily test mice with Destiny 2 and Apex Legends, as well as twitchier shooters like Quake Champions, to see how my performance stacks up against other mice. I scrutinize the cursor movement and responsiveness for lag, jitter, and other issues.

We used each mouse with its wireless receiver plugged into my keyboard or sitting on my desk, giving it the best possible wireless situation to work with. I also tested them with their wireless receivers connected into my tower a few feet away with my legs in between, increasing the opportunity for lag and interference.