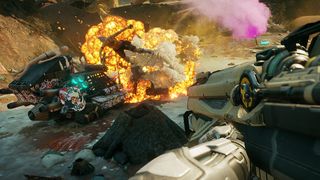 In Rage 2's ongoing mission to assure everyone it's weird, it's now promising players the chance to bend digital reality to their will with a bunch of cheats, including the classic instagib and an ejector seat that works entirely the wrong way around.

The NBA Jam announcer commentary that was announced for April Fools' is also a real thing and can be unlocked with one of these cheats. New ones will appear after next month's launch, and you can check out what's been revealed below.

Everyone will get access to the same cheats, but preorder or grab the Deluxe Edition and you'll get some of them straight away. For the rest, everyone will need to hit up the Wasteland Wizard, a travelling sage with "universe-altering powers". He'll be found wandering around and will sell cheats for in-game currency.