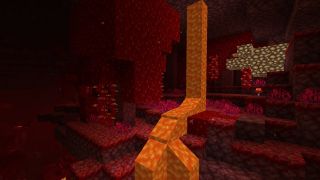 The Minecraft Nether update is officially on its way and its set to refresh an already challenging alternative dimension Introducing new enemies, biomes, blocks, and precious new ore, there are plenty of reasons to make a return trip to  the Nether.

Discover new vegetation in the two forest biomes, or brave the Soulsand Valley. Battle or barter with Piglins, and get close to the strange mob previously known as Piglin Beasts. Interested? Of course you are. So let's dig into everything we know about the Minecraft Nether update.

While we only know that the Minecraft Nether update release date is the first half of 2020, you can already get a taste of it with the Minecraft 1.16 snapshot.  Before you get snap happy and start enabling snapshots in your game, however, backup your world to avoid the possibility of corrupting your save. Remember, you can run snapshots in a different folder to your main world, too.

How to enable snapshots

Snapshot 1.16 is available to install now. In the Minecraft Launcher, open the Installations tab and enable snapshots to check out the new features.

Several new areas have been added to the Nether, with each sporting a unique atmosphere. Dig out your trekkin' boots: there are some forests and a lonely valley to explore. The old Nether biome adopts the new name, Nether Wastes and shipwrecks and ocean ruins are now significantly harder to come by.

Teeming with skeletons, Soulsand Valley is a spooky region filled with fossilised remains. The sky is thick with ash and the land is bathed in an eerie blue light. An area resting on Soul Sand and Soul Soil, this valley is heavily populated with Basalt pillars.

A funky fungi forest. Shroomlights illuminate the dark walkways of a forest where Warped Fungi manifest as tall, tree-like structures. Warped Spores hang in the air like unfallen snowflakes as a blue fog shrouds the forest. Surprisingly, this is the safest area in the Nether.

Similar to the Warped Forests, Crimson Forests provide the perfect conditions for fungi and Shroomlights to thrive. Crimson Nylium is found everywhere, and Crimson Spores clog the air. Weeping Vines hang low from ceilings and Hoglins are found patrolling their territory.

Piglin mobs are hostile by default and love collecting gold. In fact, they love gold so much that they won't attack you if you're wearing gold armour. Turn up in your best golden ensemble and Piglins will even barter with you. Good luck negotiating with them, though.

Previously referred to as Piglin Beasts, Hoglins are a mysterious species. Very little is known about them, other than the fact that they have floppy ears and aren't capable of doing much, yet. Their huge tusks make them look threatening, but oddly sweet.

Netherite is a new high-level ore found in the Nether. It possesses several properties that make it more valuable than Diamond. Netherite tools are more durable and mine materials faster. Netherite weapons do more damage than Diamond ones, too. Netherite armour is more durable, and has knockback resistance.

Also, all Netherite items have a higher enchantment value than Diamond (but lower than Gold). These items also float in lava, so you won't lose them if you happen to take an untimely dip in a fiery pool.

How to craft Minecraft Netherite

Here are all the new blocks in Minecraft's Nether update: