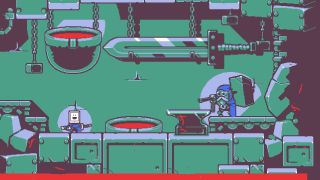 On an average day, about a dozen new games are released on Steam. And while we think that's a good thing, it can be understandably hard to keep up with. Potentially exciting gems are sure to be lost in the deluge of new things to play unless you sort through every single game that is released on Steam. So that’s exactly what we’ve done. If nothing catches your fancy this week, we've gathered the best PC games you can play right now and a running list of the new games of 2020.

Kunai is a fast-paced, parkour-driven platformer with a dreamy pastel coating. You play as "killer robot" Tabby, who in addition to being killer, can also use grappling hooks to rapidly navigate the game's pleasantly apocalyptic world. Of course, a killer robot needs weapons, and these are reportedly in abundance, likewise new abilities and movement tricks are doled out at a steady pace. There's a lot of platformers on Steam, but the movement in this looks glorious and the art style is hard to ignore.

If the whimsy above is distasteful to you, The Blind Prophet veers straight into the darkness. It's a point and click adventure set in a grimy neon hued dystopia, taking cues from the likes of Blade Runner and Gabriel Knight. According to the description, "you will play apostle Bartholomeus in his divine mission: liberate the corrupted city of Rotbork, and brave the Great Evil that lurks within." Sounds easy.

The game's name is 'Two Weeks in Painland' so you know it's going to be good. It's a "story-driven" adventure game about a hacker contending with the wrath of a bunch of gangsters he's been spying on. Or at least, I assume there's wrath incurred: the game involves managing the recruitment of new gangsters into a criminal organisation, trying your damnedest to ensure there won't be any personality clashes. A fascinating premise, with a charming graphic novel art style.

Here's a short (expect around an hour) action game about a blobby knight with an intense rotating sword, out to rescue a missing boy. Naturally, you'll be felling enemies (one of which is a blob) with this lethal rotating sword, and despite this game being a short one, there's new "powerful destructive" skills to obtain and "charming creatures" to meet. Sometimes it's nice to play a game that you can have in the bag during a single playthrough, and this one has a brilliant near-monochrome art style that grabbed my eyes immediately.

Most games are about mass slaughter. Wide Ocean Big Jacket takes a different course: it's about going on an overnight camping trip, and as far as I can tell, nothing dies and nothing especially bad happens (though maybe it does?). It's a narrative-driven adventure game with a breezy art style, and during its short playtime (60-90 minutes) you'll "roast hot dogs on the fire, go birdwatching, tell ghost stories, grab a beverage from the cooler and do cartwheels on the beach." Steam verily does have something for everyone.

These games were released between February 3 and February 10 2020. Some online stores give us a small cut if you buy something through one of our links. Read our affiliate policy for more info.