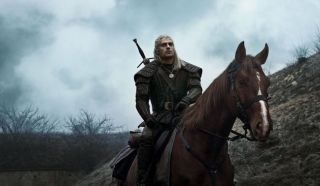 Rejoice, for it is the weekend. Unless you work this weekend, in which case, please rejoice in accordance with your schedule, and play some games, and maybe read some news. We have lots of news to read, so if that's what you're after, here are the biggest things that happened this week:

It's December 17, maybe. Netflix deleted the posts which gave away the information, but hasn't formally announced when we'll be watching Henry Cavill fight monsters and bathe, so it could change.

We also learned this week that the collectron station, also purchasable with Atoms, appeared in a trailer all the way back in June 2018, suggesting that it was meant to be part of the base game.

A comprehensive report from Kotaku revealed that many industry professionals and former Nicalis employees have serious issues with its founder. As a result, Edmund McMillen cancelled plans to work with the company in the future.

Oh, and Civ 6 battle royale is fairly fun, if a bit drab looking. I nuked James.

As corporations aim to ingratiate themselves with young people, pouring their ad budgets into memes and awful Twitter accounts, all that you love will ironically be co-opted by chicken. Do you like EDM? That's chicken now. How long before they come for metal? Oh my bad, they did that in 2008. It's chicken. The whole world's chicken. Sorry!

• Discord's Nitro Games will be closed in October

Apparently, most Nitro subscribers weren't actually playing the games. To make up for the catalog's removal, Discord is improving some of the other Nitro perks.

James reviewed Borderlands 3, and thought it was so-so: grating jokes with some decent shooting. I felt similarly. After Tales from the Borderlands, which was quite good, this feels like a step back writing-wise—all the way back to '00s-era rage comics, as a sense of the hilarity it offers. But I did have some fun futzing around with enormous sniper rifles when not being sidetracked by the Rainbow Six Siege update and Control.

Control is really good, by the way. It and Slay the Spire are currently my top two GOTY contenders, and now I'm causing myself anxiety by remembering that we need to have that meeting soon. The end of summer is already approaching.

Speaking of, if you're reading this on Friday, it happens to be both Friday the 13th and the last full moon of the summer. Play something spooky! Or, launch a monkey out of a cannon. I can't tell you what to do.

Sea of Thieves added premium currency, Ancient Coins, and pets this week, so a few of us bought some monkeys and birds to hang out with. At $5 each, they aren't cheap, but Rare's done a great job endearing the rascals to me. They react to emotes, dance to music, get upset when you fire your gun, and otherwise wander around the ship, falling asleep in cute places.

Chris, of course, had to know whether or not you can fire the pets out of cannons. You can. Don't worry, though, they just teleport back to you. You can also feed them uncooked grubs and they might puke. Not very nice. Pick them up and pet them and maybe they'll forgive you.

You can find Ancient Coins by playing, but we haven't encountered any of the special skeletons they come from yet—I doubt it's easy to pick up great quantities of them in-game.

That's it for this week. Have a good one, and may no one spawn peek you.