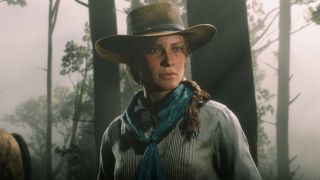 The RDR2 system requirements aren't too demanding, and we were happy to hear that it'll have support for arbitrary resolutions and an unlocked framerate. We also learned more about the new stuff coming to the PC version. Horse enthusiasts will be pleased.

When a Hearthstone winner made a statement in support of the Hong Kong protests in his live interview, Blizzard rescinded his prize money and barred him from competing for a year. The two casters there to conduct the interview were also dropped. Widespread anger over the incident has been directed at Blizzard throughout the week, with calls to boycott its games and protest at Blizzcon.

Casters Nathan 'ThatsAdmirable' Zamora and Brian Kibler stepped down, and some Blizzard employees staged a walkout. Blizzard's only statement so far has been to say that Blitzchung breached of Section 6.1 of the 2019 Hearthstone Grandmasters Official Competition Rules. It'll likely have to do more than that, because the backlash is only growing as Blizzcon approaches. It'll be an interesting one.

...But only if you live in the UK or Germany.

A bit of a surprise reveal of WoW's 8.3 update gave us a look at its two new races. The foxes are the best, but the Mechagnomes are pretty cool, too, if you like a light cyberpunk flavor to your fantasy.

The classic 'maintenance person' trick still works. And no, his haul did not apparently include the source code for Half-Life 3.

The game won't be that big at launch, but may be in the future after "post-launch content" is released. A 1TB SSD feels too small, all the sudden.

This week we began work on articles that will be appearing closer to the end of the year, which is also the end of a decade, and you know what that means: retrospection. PC gaming changed immensely in the '10s, so there'll be a lot to talk about. (Left 4 Dead 2 will be 10 years old in November, if you can believe it.)

For now, though, our immediate concerns are all those games that keep releasing. We reviewed John Wick Hex (liked) and Ghost Recon Breakpoint (did not like), among others. Tom lamented that Indivisible's story is putting him off the game, though Lauren enjoyed the combat enough to recommend it.

Meanwhile, Wes gave us a look inside indie gaming festival Bitsummit, an interview with Tetsuya Mizuguchi, and more from his recent trip to Japan. I highly recommend reading his interview with Katamari Damacy designer Keita Takahashi.

Finally, a bunch of us got together to predict the big stories we expect to play out for the rest of the year. Will we be right or wrong? I predict: yes.

Enjoy your weekend, and may all your automatic Windows updates go smoothly.