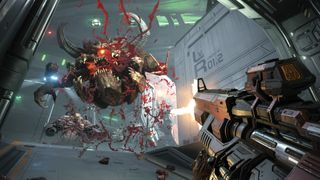 Doom Eternal won't be hitting its November 22 release date, unfortunately. Developer id Software announced the delay on Twitter, along with a few more changes the team has made.

The new release date is March 20, 2020. id says it needs more time to "live up to our standards of speed and polish".

An update on DOOM Eternal: pic.twitter.com/2LWrfh6e4ZOctober 8, 2019

As well as the new release date, id has announced that Doom Eternal's Invasion mode, which will let people sneak into other players' games as demons and assassinate Doomyguy, will be released as a free update shortly after launch.

Doom 64, meanwhile, which was just going to be released on Switch, will also be available on PC. You'll be able to get a copy for yourself with Doom Eternal preorders or pick it up on March 20. This explains why a PC rating for Doom 64 appeared earlier in the year.