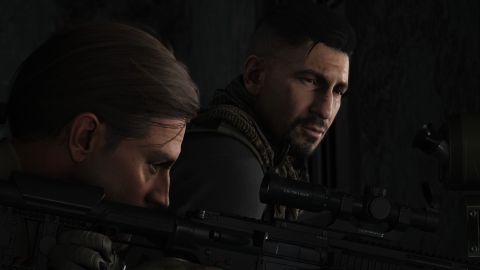 Poorly stapled-on mechanics and a general lack of polish make Breakpoint's open-world tactics simply not worth the time.

Ghost Recon Wildlands was a middling open-world shooter, but it wasn’t entirely devoid of potential. With more diverse missions, a greater range of tactical gadgets and abilities, and a better thought-out story, it might have succeeded in justifying its ludicrously huge world and absurd number of activities.

As a sequel, Ghost Recon Breakpoint adds none of these things. In fact, Breakpoint adds nothing of value to the Ghost Recon template. Instead, it transplants into Wildlands’ structure several systems from other Ubisoft franchises, systems that have no place in a game like Ghost Recon. Meanwhile, it actively removes some features that were present in Wildlands, while making others considerably worse. In case I’ve not made it clear, I don’t think it’s very good.

At least the story isn’t likely to trigger a political incident, although this is mainly because it’s unlikely to trigger any spark of emotion whatsoever. Wildlands’ real-world setting of Bolivia has been switched out for the fictional island of Auroa, an offshore Silicon Valley where your friendly neighbourhood techbro Jace Skell tries to make the world a better place by building killer drones. At the game’s outset, Skell’s operation is hijacked by a former Ghost named Walker (played by Jon Bernthal), who plans to use Skell’s drone army for nonspecific Nefarious Means.

Players assume the role of Nomad (which, incidentally, also means “Walker”, suggesting the writers struggled to come up with two generic soldier names) deployed as part of a large team of Ghosts to investigate the situation on Auroa. But the Ghost’s helicopters are shot down by the island’s automated weapons system, and Nomad finds himself alone and hunted through the forest by Walker’s gang of mercenaries who call themselves the “Wolves.”

There is some potential in the new setting. The amorality and unaccountability of modern tech giants, particularly in their associations with the world’s military organisations, is a rich seam to explore in a tactical shooter. Sadly, this potential is squandered in favour of a more generic military tale exploring Nomad and Walker’s relationship, which is detailed through long, unskippable flashback cutscenes. Jon Bernthal does a splendid job inhabiting the role of Jon Bernthal, but it’s hard to take his character seriously when every NPC around him looks and acts like a mannequin with a mop on its head.

The quality of the storytelling is generally poor, but the real issue is how insistent it is upon its own misplaced importance. To dispense its narrative, Breakpoint has adopted wholesale the conversation system from Assassin’s Creed Odyssey. It’s virtually identical, from the shot, reverse-shot camera angles to the occasional (and in Breakpoint’s case, largely pointless) dialogue choices. Only instead of playing a flirtatious Greek mercenary who chats with Herodotus and argues with Socrates, you’re a dead-eyed pile of khaki chewing over plot exposition with Scientist #315.

Across Breakpoint’s 30-40 hours, you’ll sit through reams upon reams of tedious, sometimes laughable dialogue. My favourite line, stated entirely seriously, is “You might be a Ghost, but you’re not untouchable!” It’s quite shocking what an absurd waste of resources Ubisoft has plunged into Breakpoint’s narrative, not least because it obstructs the flow of the game far more than it ever contributes. Conversations will often occur mid-infiltration. In one example I triggered a chat with a scientist while enemy guards were literally stood around us.

Speaking of wasted resources, Breakpoint adopts a Division-like loot system, also known as “The Division’s loot system.” But the whole concept of loot is rendered pointless by how Ghost Recon’s combat works. Damage is meted out according to ballistics rather than level-gating. No matter how much armour someone is wearing, if you shoot them in the face, they die. This is generally how I prefer shooters to work, and I’m glad Ghost Recon sticks to this. But it also means the first gun you pick up is functionally very similar to the last. Ubisoft’s struggle to make drab military gear interesting as loot also leads them to some absurd places, where a trucker’s cap offers greater protection than a crashproof helmet.

These bolted-on systems come at the cost of improving the core experience, which, in the right circumstances, can be enjoyable. Like Wildlands, Breakpoint can be played with up to four people. Personally I found it most fun with two, as beyond that it’s difficult to play stealthily. Specifically, one of us would deploy as a sniper in an overwatch role, while the other performed the wetwork of infiltrating bases and completing objectives.

Using this structure, we quickly fell into a fun routine, hovering over bases in a helicopter and studying the layout, before dropping off the sniper at a nearby elevation point with a good overview of the base. They would then scout out enemy patrols and take out straggling guards, while the other player located an entry point and tried to sneak to the objective. If the alarm was raised (And it frequently was) we’d switch to all-out assault, which Ghost Recon facilitates nicely through its slick aiming and lethal-feeling guns.

Played in this way, Breakpoint is fun in short bursts. However, it takes little for the enjoyment to stall. Trying to navigate Auroa on foot or is incredibly difficult due to its craggy terrain, compounded by Breakpoint’s weirdly specific simulation of traversing slopes. If you run too quickly down one or try to climb one that’s too steep, you’ll start to slide, before eventually stumbling into a health-depleting roll. Ground-based vehicles are also generally a no-go, as they too easily alert enemies to your presence.

Breakpoint caters particularly poorly for solo players. The AI companions who accompanied you in Bolivia have been cut out completely, but the game doesn’t compensate for this in solo play. Breakpoint is not an especially difficult game, but there are points when it becomes punishingly hard to play solo. In one example, where I had to defend a scientist stood at the end of a causeway, the only way I could stop my position being rushed by enemies was to deliberately crash a helicopter in the doorway from which they approached. Criticising a co-op game for poor solo play may not seem fair, but there are plenty of co-op games on the market which are enjoyable when played alone, such as Remnant: From the Ashes or Ubisoft’s own The Division 2.

Even when played properly in co-op, Breakpoint never evolves beyond the basic teamwork I’ve outlined. The upgrade tree, which becomes the main thrust for progression in the absence of compelling or distinctive loot, is far too anaemic. The most interesting unlockable tool is a torch for cutting through fences, and even this is so slow to use that it’s generally easier to find another point of entry. Your objectives, meanwhile, nearly always involve collecting “intel” from a base, which then usually points you to another base where more intel has to be collected. Sometimes you’ll need to extract an individual from an area or assassinate a specific target, but these are much rarer by comparison, and more bespoke mission structures are one in a dozen if you’re lucky.

Ghost Recon Breakpoint is a bizarre Frankenstein’s monster of a shooter, functional in a basic sense, but fundamentally at odds with every second of its own existence. The only breakpoint represented here is for Ubisoft’s carte-blanche open world design, which completely loses sight of the core experience Ghost Recon is supposed to offer. The systems borrowed from other Ubisoft games are about as fitting for a tactical shooter as a clown suit and a megaphone, while the toolbox available to the player is nowhere near deep enough to spread across the hundreds of samey activities filling the world. If Wildlands was disappointing, Breakpoint edges close to disaster.

Poorly stapled-on mechanics and a general lack of polish make Breakpoint's open-world tactics simply not worth the time.