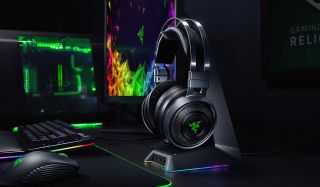 The Razer Nari Ultimate is at its lowest price ever with today's deal. (Image credit: Razer)

Some deals sound better than others, and this quite literally is one of them. Specifically, Amazon is selling Razer's Nari Ultimate, one of the best gaming headsets around, for its lowest price ever right now.

It's marked down to $129.99, which is a hefty $70 discount over its MSRP. It often sells for the full price too, save for the occasional dip to around $175. We've also seen it briefly drop to $160 before, but never has it been this low that we can recall. Perhaps this is indicative of an updated model being in the wings, but either way, this is a fantastic price for this headset.

Razer Nari Ultimate Headset | 7.1 Surround | Wireless | $129.99 (save $70)
This is one of our favorite gaming headsets, in part because the haptic feedback works surprisingly well. Combine that with the comfortable earcups, wireless design, and 7.1 surround support, and this is one is easy to recommend (especially at this price).
View Deal

The Nari Ultimate is a wireless headset with 7.1 surround. It's equipped with large 50mm neodymium drivers to ping your eardrums with sound, and offers balanced audio with a frequency response range of 20Hz - 20,000Hz. We also like the roomy earcups on this headset.

It's the haptic feedback that is the real star of the show, though. This is what Razer refers to as "HyperSense." Call it whatever you want, the haptic feedback works in its favor. In his review of the Razer Nari Ultimate, Gabe said "it feels like you're wearing a pair of subwoofers on your head, and I have to say it's pretty rad."

HyperSense doesn't require explicit support, either. Lofelt L5 haptic drivers planted in each earcup handle the digital signal processing, so matter what you are playing or listening to, you can have vibrations if you want them.