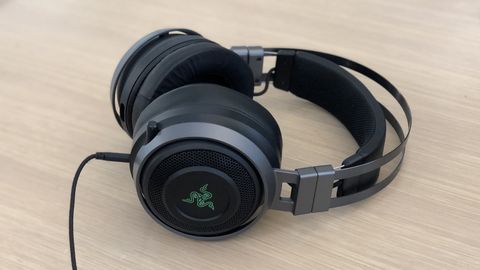 The Razer Nari Ultimate introduces the company's haptic feedback technology to PC gaming in a major way, and we're here for it.

For decades now, game controllers on consoles have enjoyed the immersive benefit of haptic feedback. Dating back to the Nintendo 64 controller Rumble Pak, vibrating motors have served as an industry standard outside of traditional mouse-and-keyboard PC gaming. Although the obvious move would be introducing haptic feedback to your rig by way of a vibrating mouse or keyboard (we've already seen this attempted with the SteelSeries Rival 700), Razer has constructed a new vessel for eliciting a touch-sensory response from your favorite games: the Nari Ultimate gaming headset.

Priced at $200, the Razer Nari Ultimate punches above its weight. As well as showcasing—for the first time ever—the company's new HyperSense haptic technology, it boasts competitive specs nearly in line with those of our personal favorite SteelSeries Arctis Pro. Despite the fact that its frequency range is shorter, not to mention it lacks the Arctis Pro's enticing noise-cancelling functionality altogether, the driver unit on the Nari Ultimate is a larger 50mm. As a result, Razer's new headset is more powerful than SteelSeries' insofar as it's possible to crank the sound up to a louder volume.

Of course, the real star of the show is HyperSense, which processes the most intense audio signals from whatever device it's connected to and reproduces them as vibrotactile frequencies. In short, it feels like you're wearing a pair of subwoofers on your head, and I have to say it's pretty rad. Because the digital signal processing is handled by the Lofelt L5 haptic drivers planted in each earcup, games don't have to "support" HyperSense at the software level in order for it to work. Whether you're sniping down friends in Battlefield 5 or vibing out to the new Saba track, the Razer Nari Ultimate will leave your head quaking… but, like, in a good way.

To be frank, I went in to this review anticipating disdain for HyperSense. I never asked for a pair of cans that vibrate, but I was interested in writing about one. If executed well, it could institute a new standard that more over-ear headphones adhere to. Maybe that's a stretch. However, after persuading a few friends to try 'em out for themselves, I can safely conclude that I'm not crazy. Haptic feedback on the Razer Nari Ultimate is quite good. HyperSense has a certain 'wow' factor to it, one that's a challenge to adeptly describe. Like most new technologies, especially the weird and wacky, you have to experience it for yourself to really get it.

Compared with the motors found in my phone and various gamepads, the vibrations of the Razer Nari Ultimate are notably more realistic due to its wide range of haptic frequencies. Spanning 20Hz to 200Hz, the feedback is at its strongest during loud, impactful in-game events. In Battlefield 5, for instance, the recoil of the pistol is lighter than that of the shotgun. And when you're operating an armed vehicle, such as a tank, the trembling of the headset is heightened even further. While I expected HyperSense to feel unnatural and perhaps a bit silly, with the technology enabled in Razer's Synapse 3 software, I actually did feel more engrossed in the games I tested it out with.

In terms of sound quality, Razer has a history of prioritizing bass over everything else. Fortunately, the Nari Ultimate is a welcome departure from the company's usual strategy, incorporating a nice balance of low ends and mids. That said, being the gaming headset that it is, I prefer my Sony WH1000XM3 headphones for listening to music. Although the earcups are more spacious and comfortable on the Nari Ultimate, its lack of noise cancellation is disappointing. As much as I enjoy the experience it provides while gaming, HyperSense is less of a novelty and more of a superfluous decoration when I'm bumping my "dance and/or cry" playlist on Apple Music.

Otherwise, the Razer Nari Ultimate is par for the course. It has a retractable mic that you can mute by pressing a button conveniently placed on the backside of the left headphone. Below that is a scroll wheel you can use to balance chat volume with in-game audio. A power button, micro USB charging port and 3.5mm jack are located beneath the roller. Behind the right can is a volume wheel and, on the bottom, is a spring-loaded garage for the 2.4GHz wireless USB dongle, which is compatible exclusively with PC, PS4 and Mac. Xbox One and Switch gamers will have to settle for a wired analog connection. Either way, Razer promises a battery life of 8 hours with the Chroma lighting and HyperSense turned on or 20 hours with both of those features disabled.

As a standard wireless gaming headset, the Razer Nari Ultimate does its best to stand out from the crowd. Sure, you'll get a higher frequency range from the cheaper (without the DAC) SteelSeries Arctis Pro, but then you're missing out on what makes the Nari Ultimate so compelling to begin with: HyperSense, the unique technology behind its integration of haptic feedback. A non-'Ultimate' version of the Razer Nari also exists, sacrificing those good vibrations altogether for a slightly lower price point. But if you're looking for a headset that doesn't vibrate, there are a number of better options out there. After using the Razer Nari Ultimate extensively, I'm convinced that HyperSense is well worth the premium.

The Razer Nari Ultimate introduces the company's haptic feedback technology to PC gaming in a major way, and we're here for it.