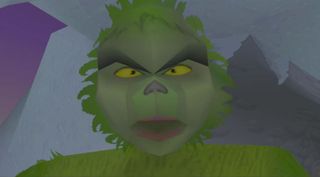 Wes Fenlon spends Christmas playing retro games that have Christmas themes. I didn't even know there was a Grinch game, but my life is better for having this knowledge in my brain, for sure. Just don't ask me to play it.

Chris Livingston has been playing Red Dead Online, but after experiencing some bugs when he tried moonshining, now he's fallen prey to a cheater, who hacked dynamite into his coat then blew him up repeatedly. It's like Sartre definitely didn't say: Hell is other people on the internet.

Rachel Watts has been playing Telling Lies, the FMV investigation game that lets you spy on people's video calls and recordings. As she points out, its use of real actors means it can suggest when someone might be lying to greater effect than L. A. Noire, where even fancy facial capture technology wasn't quite enough to leap that hurdle.

Joe Donnelly went native in GTA Online's roleplay servers a while back, and his latest adventure has been trying not to have an adventure at all. He's got himself a nine-to-five job as a courier and is trying to live an ordinary life. How long do you reckon that'll last?

Rick Lane has been playing Hitman, and to make it interesting he's randomly determining which weapon to use on each target. It's a way to add variety when you might otherwise rely on familiar, effective tools like the old "emetic poison and drown 'em in a toilet" combo.

I'm still barrelling through Baldur's Gate, determined to finally finish it for once. I've made it to the Tales of the Sword Coast expansion, which includes a dungeon that sucks in wizards who use teleportation magic then won't let them leave unless they ditch all their arcane items. It's as if the place feeds on the stuff of magic. Right after that I trekked through Durlag's Tower, the expansion's big puzzle dungeon, and I think I might be done with Infinity Engine dungeon-crawling for a while.

Enough about us. What about you? Did you score any new games for Christmas, or have you been using the break to catch up on something from the backlog? Have you been inspired to go back to The Witcher 3 by Netflix's TV version, or are you trying some of Epic's recent giveaways? Let us know!