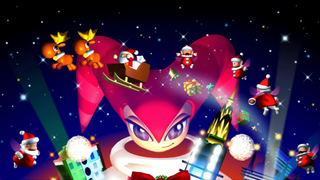 I'm ready for Christmas. The tree, the lights, the eggnog, the 15 pounds of cookies waiting to put me in a sugar coma—and the time to relax and enjoy a little time off. Like a lot of people I'm traveling over the holidays, which means I have a laptop that can't handle the latest and great, but can play all kinds of retro PC games with ease. Which means I'm definitely playing Jazz Jackrabbit.

But not regular Jazz Jackrabbit. The Christmas Edition, obviously. While today's online games might get a temporary dusting of snow across the map for Christmas or turn weapons into candy canes, in the '90s some PC games got entirely separate editions remade with Christmas cheer. And today it's easy to play most of them right in your browser, courtesy of the Internet Archive.

Here are the ones I'll be playing over the holidays.

Before Unreal Tournament and Gears of War and Fortnite, this was Epic's hot DOS game. It's the PC version of a Sonic the Hedgehog platformer, which meant even more 'tude: start with the speed, then add a laser gun and red headband. This Christmas special was a shareware freebie named "Holiday Hare" with three levels on the planet "Holidaius."

Jazz has a Santa outfit, there's snow falling on the main menu, enemies are wearing snow skis. The simplicity of Jazz's platforming has aged well: it's a fun, breezy way to spend half an hour.

Nights: Into Dreams was a strange game when it was released on the Sega Saturn, and still feels strange today. It's framed like an arcade score attack game, but in practice it's more zen, about freestyling one loop into another, drawing patterns in the air as you collect orbs for points. Christmas Nights was a special bonus disc with a couple levels from the original game, and it used the Saturn's built-in clock to give the world a Christmas makeover, complete with unique graphics, music, and storyline.

The shareware version of Jetpack was a staple of my childhood thanks to its awesome level editor. I could only play the few levels available in the free version, but I spent hours building my own. The Christmas version just changes out a few graphics and turns you into a jetpack-wearing Santa hunting for presents, but it's still a new set of free levels, and it's still fun. The level editor is, again, included.

Amazingly, Jetpack actually got a modern, Kickstarted sequel, which you can get here.

There were multiple holiday-themed Lemmings releases, but the 1994 version bundles up the previous levels into the biggest collection. There's a nice layer of snow over everything. It's all very cheery, until you send all your Santa-dressed lemmings plummeting to their deaths. Merry Christmas, ya filthy animals.

The Grinch movie starring Jim Carrey feels like an early 2000s fever dream now, but it was a real thing, and so was the licensed game made to go along with it. In fact, Oxenfree developer Sean Krankel got his start working on it. That may be the most interesting thing about it, but hey, it's a fully Christmas old school 3D platformer. And the music's pretty good!