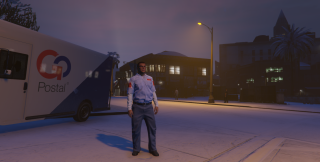 Ever had your private parts gnawed on by a hungry police dog while you’re laid flat on your back, oozing blood, on the tiled floor of a jewellery store’s vault room? I have. Several times. And after an exhilarating run of murder, deceit, robbery, and, um, vampirism and death-by-undead in Grand Theft Auto 5 roleplay, I must admit: I’m knackered.

For a long time now, I’ve flirted with the idea of truly committing to a server’s RP rules without listening to the pint-sized devil on my shoulder. When not chasing missions in Story Mode or GTA Online, I bet you’ve had a bash at playing by the book in Grand Theft Auto. I bet you’ve driven at the speed limit and stopped at red lights. I bet you’ve had fun, for a wee while, before strolling down the sidewalk and sticking the head on an innocent passer-by just because, well, you can.

More than GTA 5’s vanilla modes allow, though, the roleplay scene lets you sign up to a 9-5 lifestyle wholeheartedly. In doing so myself, I’ve discovered an entirely new game. And I love it.

With this, combined with end-of-year reflection, new year’s resolutions and the spirit of giving during the holiday season in mind, my latest roleplay endeavour saw me throw myself into a courier job with GoPostal. I stuck religiously to an in-game schedule as I commuted to work on my BMX bike, bought my lunch at the local gas station, worked a shift, clocked off at the end of the day, and returned home.

Similar to how Andy enjoys simulator games, I found myself utterly captivated by the systematic monotony of my self-imposed rules, and, as conceited as it may sound, discovered a degree of serenity I never thought possible in a game otherwise associated with murder, drug deals and robbing banks.

Playing as a delivery man at Christmas, with Free Mode’s snowfall filter in full-swing, I quickly took on the mantle of makeshift Los Santos Santa Claus. I galvanised the holiday vibe by playing a Christmas playlist in real life, which, in essence, meant playing Chris Rea’s ‘Driving Home For Christmas’ on repeat, because, let’s be clear, it’s the best Christmas song in the history of Christmas songs.

I'm driving home for Christmas. Oh, I can't wait to see those faces.

What a tune, I think to myself, as I set up camp in the Clinton Residence – Auntie D’s house in Strawberry, otherwise known as the Forum Drive safehouse, and, for the purpose of this roleplay endeavour, ‘home’.

In the Grand Theft Auto HD Universe (from GTA 4 onwards), one in-game hour is equivocal to two real-life minutes. One in-game day, then, is 48 real-life minutes-long. My day starts at 6am, and work begins at 8, which means I’ve allowed myself four minutes to grab lunch from the 24/7 garage round the corner, before cycling to the GoPostal depot in Downtown Vinewood on the other side of town. No bother.

“Welcome to 24/7, the most convenient store in America,” says the clerk as I come through the door. I nod, smile and order a handful of Meteorite bars, Ps & Qs and Ego Chasers. I grab a couple of cans of ECola, hop back on my BMX and head for work. Los Santos never sleeps, they say, but it’s a bit bleary-eyed at this hour as I make my way across the city, singing all the way.

I climb the hill towards the office, take a glance over my shoulder and admire the morning sun that blankets the buildings at my back. I get changed into my uniform and receive my delivery route. My first drop is at the Paleto Bay Sheriff Office, which is quite a drive away. I pull away from headquarters, mute the in-game radio, turn up my real-life speaker, and hit the road.

And it's been so long. But I will be there. I sing this song. To pass the time away.

Driving in my car. Driving home for Christmas.

Honestly, man, what a tune. After Paleto Bay, I’m sent to Vespucci Beach, then to a property near Legion Square, north to Grapeseed, west to North Chumash, then south to La Puerta. I pull in to the side of the road in Little Seoul and tuck into my convenience store-bought lunch, before being sent to another handful of stops up and down the map before closing time at five bells.

Back at HQ, I ditch the work van, jump back on my two-wheeler and briefly consider stopping off for a cold one in Gefängnis to celebrate my first shift, but decide against it. I’ve got a busy week ahead, and these presents ain’t going to deliver themselves.

It's gonna take some time. But I'll get there. Top to toe in tailbaaaaaaccckkkkssss.

The next few days play out much the same until Friday. Oh, my days, Friday. After a typically innocuous start to my route, my van breaks down because, the dummy that I am, I forget cars in this server require refilling at gas stations and I’m flat out. I push my car to the side of the road, and, despite being on the peripheral of the city, struggle to hitch a ride.

As fate would have it, a lovely Royal Mail worker does offer me a ride – odd, given Los Santos is a faux version of Los Angeles, situated some 5,160 miles away from where the five-century-old British courier service tends to operate. I don’t ask questions and assume it’s a Christmas miracle.

The Royal Mail operator, Becky, and I spend the next five minutes chatting about Christmas, our families, the San Andreas courier community, and our favourite festive tunes. Becky prefers Mariah Carey, it turns out, but admits Chris Rea is a close second. I don’t react. She’s doing me a favour, after all.

As we make our way over the Tongva Valley Bridge we chat some more before – BANG – some arsehole hits the side of our van and runs us off the road. We tumble down the embankment and crash into the river below. Panicked, I scramble out of the truck and swim to shore. I shout to Becky to see if she’s okay, but she’s nowhere to be seen. I look back and see a shadow bobbing just beneath the surface. She didn’t make it.

Oh, I got red lights on the run. But soon there'll be a freeway yeah. Get my feet on holy ground.

It’s all gone a bit Planes, Trains and Automobiles by this point, as I’m starving, exhausted and without any means of transport. After half-a-days’ worth of roving, I make it back to Auntie D’s house and turn in.

In the morning, I arrive at work and explain my day from hell to my boss who takes the news surprisingly well. I’m assigned a new van, a new route and told to go about my day as normal.

And so I’m back on the road, navigating snowy San Andreas, delivering gifts and half-considering switching up my Christmas playlist in memory of my fallen courier comrade. I mean, I won’t. That’d be ludicrous. But I will croon in her honour.

So I sing for you. Though you can't hear me. When I get through. And feel you near me…

Driving in my car. I'm driving home for Christmas.

Driving home for Christmas. With a thousand memories.

I’ve sunk hundreds of hours into exploring San Andreas from top-to-tail in pursuit of outlandish RP ventures, and I’ve gradually grown to appreciate the beauty of the setting. For me, despite it now being over six years old, there’s not a modern open-world setting out there that comes close to the faux California’s beautifully incongruous sprawl – a dysfunctional hash of urban, suburban and rural regions, all boasting their own charm and allure.

Sure, breaking the rules yields entertaining tales, but there’s something to be said for just living in Los Santos, and appreciating its world without its in-yer-face distractions.

I’m now stuck in gridlock and the city is abuzz around me. I take it all in. The bright lights. The steady hum of traffic. The revellers pouring out of nightclubs onto the sidewalks. The police choppers marshalling the sky like mechanical angels above. I love this city.

I take a look at the driver next to me. He’s just the same.