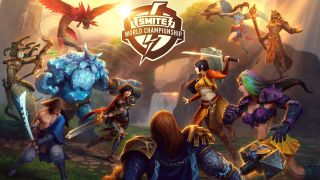 This year, the event formerly known as the Smite World Championship has expanded and become the Hi-Rez Expo, a broader showcase of the studio's games and their attendant esports scenes. Smite is returning for its third championship final, while the competitive life of Paladins is just beginning.

Smite isn't the newcomer it once was, but it has held onto the underdog charm that drew me to it when I first started following the competitive scene back in 2014. It has a passionate following, and the atmosphere in the Cobb Energy Center has been fantastic in the previous years that I've covered this event. I thoroughly recommend dipping in over the coming days, even if you're new to the game and its competitive element.

This will also be a big weekend for Paladins, a game that is still in beta and that has undergone a number of big changes before adopting its current form. It has heavier MOBA leanings than other team-based shooters (as you might expect, given its heritage) and this weekend will demonstrate how well that translates to the main stage.

For more from HRX 2017 this weekend, keep an eye on PC Gamer Pro.

Smite is a third-person MOBA with a mythological theme that places heavy emphasis on map control and teamfights. Matches are spectated from a traditional top-down perspective, which makes things much more readable but does misrepresent how much skill goes into moment-to-moment play at the ground level. The majority of attacks and powers are manually aimed and players have limited line of sight. It can take a little while to appreciate the skill of the very best players, but it's worth getting there in order to get the most out of the drama of a top-tier match.

Ten teams will enter, with all but two—the top seeds from Europe and North America—entering a placement stage starting on Thursday. The top six teams emerging from that process will join the regional champions in a single-elimination bracket culminating in the grand finals on Sunday. There's a million dollars on the line, with $500,000 of that going to the overall winner.

A lengthy qualification process has determined the current crop of the world's best Paladins teams. Group stage play will begin on Thursday on the Expo Stage, culminating in main stage semifinals on Saturday followed by Sunday's grand finals. There's $150,000 to be won.

This process echoes the esports debut of Smite back in 2014, and chances are the scene will shift dramatically from here on out: don't bet on these teams staying exactly as they are, but there's a decent chance that the players who make the stage debut this weekend will be a fixture in the scene to come.

This mirrors the game itself: a team shooter that has spent some time finding its feet and is now establishing its own identity. Given that it is a team shooter that centres around capture points and payloads, Overwatch is an obvious point of comparison—and there are certainly characters and abilities that invite it. Yet Paladins diverges in a number of crucial ways, and not just because everyone has a horse.

Those characters and their abilities are different, even when they appear similar at first glance, and each is tweaked by a card-based upgrade system and an in-game progression mechanic similar to a MOBA. There's no mid-game character switching, so team composition is a bigger factor, and the hybridised format of each match is uniquely Paladins. Games start as king-of-the-hill, with both teams vying for control of a central capture point. Once it's taken, however, the capping team spawns a payload which must be escorted into the enemy's territory.

HRX kicks off at 10:30 EST on Thursday, with the first Smite match beginning at 11.00 EST. If you want to skip straight ahead to the climax, the Paladins finals are at 10:00 EST on Sunday while Smite concludes later that day at 17:00 EST. You can find the full schedule here and the livestream at twitch.tv/hireztv.