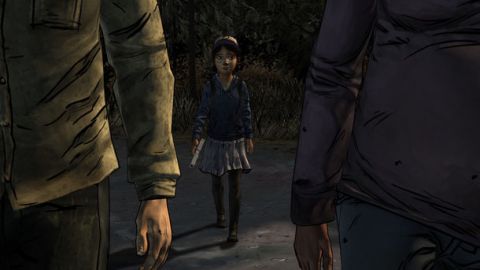 All That Remains sets the stage for some great character development for Clementine, but there's not much payoff in this 90 minute episode.

I am Clementine. You are Clementine. In the second season of Telltale's The Walking Dead, we are all Clementine. But what kind of Clementine will we choose to be? The Clementine who trusts no one and does whatever it takes to survive, alone, in the unforgiving new world order of zombies, and assholes who will inevitably become zombies? Or the Clementine who wants to find a new family, who believes there are still good people walking among the dead?

I want my Clementine to be the latter. To be good. But one episode into season two of The Walking Dead, I've already made Clementine a killer, and not just for survival. For vengeance.

Every conversation in season two's first episode, "All That Remains," plays a very small part in shaping the person Clementine becomes. She's about 11, now—season two takes place 16 months after season one—and making life-or-death decisions 11-year-olds shouldn't have to make. It's like guiding a kid through the the early changes of puberty, except instead of deciding whether to lie to her parents about a concert, she's deciding who to trust with her life and who to blackmail.

It's a new take on The Walking Dead's young moral compass, but the rest of the episode feels like a return to familiar zombie-infested territory. Season one codified Telltale's formula for morally ambiguous interactive fiction, and nothing in season two's first episode changes the recipe. Telltale's The Wolf Among Us introduced a cleaner UI and livelier action scenes than the first season of The Walking Dead, and those changes have thankfully been carried over to season two. The combat QTEs are still the least interesting elements of Telltale's games, but they're more fun and less clunky this time around.

Those morality-bending dialogue options are still The Walking Dead's main hook. Unfortunately, for roughly the first half of this one-and-a-half-hour episode, there are few people for Clem to talk to, and most of the decisions and dialogue options that come into play in the second half of the episode feel like groundwork for the rest of the season. I wanted more opportunities to talk to the survivors Clem meets, and more time to learn about them. Instead, she spends a good bit of the episode fending for herself, and we only get teases of backstory on the new cast.

When you finally get to make dialogue choices, it's clear that Telltale put a lot of thought into how Clementine should work as a protagonist. She can, for example, play on the sympathy of adults, whimpering that she's just a helpless kid. Clem's faux innocence is a fun and welcome change from season one's Lee, who couldn't turn on the puppy dog eyes and manipulate someone by saying "I can tell you're nice."

Clementine can. And I do. But I'm not sure how far I want to take that manipulation. Clementine isn't exactly a blank slate—at this point she has seriously seen some things—but do I want to make her jaded and cold, bitter about what she's been through? The answer is no. Protecting Clementine from walkers is the easy part. I worry more about guiding her down the darker paths Telltale offers.

Season two proves that Telltale can still subvert expectations, even within simple dialogue options. I readily agree to be friends with another young girl in return for her help. Being nice is good, right? After she she gleefully declares we're besties forever, I'm not so sure. I get the sickening feeling that my promise is going to come back to bite me when this girl goes full-on crazy town.

What The Walking Dead does best—as a comic, television show, or videogame—is show just how suddenly and violently everything can go to shit. That is the essence of Robert Kirkman's world, and those numbing I-can't-believe-that-just-happened scenes infect all the rest with a creeping sense of unease and dread.

"All That Remains" has one of those moments. It shocked me. After 30 minutes I thought I had the direction for the episode figured out, and I was feeling pretty clever about it. I was wrong. Not just wrong—totally blindsided. And I turned Clementine into a killer. Only a character's death in season one's "Long Road Ahead" shocked me more.

It's a shame that the first half of "All That Remains" is so light on dialogue when character interaction is the beating heart (and often guilty conscience) of Telltale's games. While the second half introduces new characters, I didn't get a good sense for many of them; more than any other Telltale episode so far, this one feels like a prelude to the good stuff rather than a story that stands well on its own.

At 90 minutes, "All That Remains" is a good hour shorter than most of season one's more self-contained stories. If you had trouble waiting weeks between last season's episodes, consider waiting until episode two (or even the whole season) is available before diving in. "All That Remains" proves that Clementine will be just as compelling a protagonist as Lee, and I'm eager to see where her story goes. I hope I haven't completely eroded Clementine's humanity on the way.

All That Remains sets the stage for some great character development for Clementine, but there's not much payoff in this 90 minute episode.