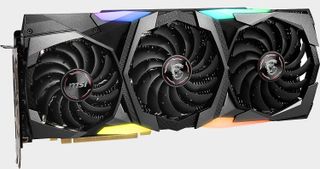 We haven't seen many deals on GPUs recently, but if you're in the market for an upgrade, you can pick up an RTX 2070 Super for £497 right now at Amazon. It's the lowest price that we've ever seen this particular model. While the listing states a saving of £88, somewhere around £55 is probably closer to the mark when considering its historic price.

This MSI RTX 2070 Super has 8GB of GDDR6 memory, a 1800MHz boost clock speed, and real-time ray tracing. As you'd expect from one of the newer GPUs, there's support there for 4K too, making this a great choice if you're considering pairing it with the best 4K monitor for gaming.

The Super editions of the RTX 20-series family were released earlier this year, so you can rest assured that you'll be picking up one of the newer GPUs on the market if you do decide to take the plunge. We certainly think it's worth the investment, assuming you have the CPU to support it, and it even comes in at number four on our guide to the best graphics cards this year.